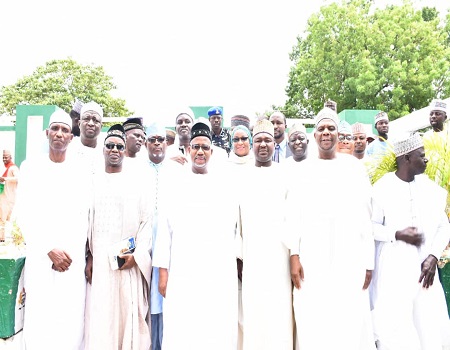 Bauchi State Governor, Sen. Bala Mohammed Abdulkadir has inaugurated a 17-member Asset and Funds Recovery Committee charged with the responsibility of recovering every asset and money misappropriated by government officials who served between May 2007 and May 2019.

While inaugurating the Committee headed by a former Senator representing Bauchi Central, Isa Hamma Misau, the Governor lamented that in spite of the whopping sum of about N64 billion that the state got as bailout and Paris Club refund in the last four years, it is still owing pension and gratuity of about N27 billion.

Bala Mohammed declared that the Committee though not a witch-hunt of anybody but it is expected to employ every legal means possible to recover all monies found to have been fraudulently overcharged and paid to any contractor handling any contract awarded by the state government as well as ascertain the level of completion of such contracts.

He further charged the  Committee to in consultation with ministries, departments and agencies of the government to ascertain and appraise all cases where the government developed landed properties were disposed of between May 2007 to May 2019 with a view to determining the legality or otherwise the transactions that culminated into the disposal of the assets and recovering them for the government.

Another term of reference for the committee according to the Governor is to consider and review all land allocations carried out by the previous administrations from May 2007 to May 2019 without following the process of law as enshrined in the Constitution of Federal Republic of Nigeria 1999 (as amended) and the Land Use Act of 1978.

The Committee is also to liaise with the Attorney General of the State to prosecute all manner of persons as may be found culpable in committing offences relating to misappropriation of public funds and or criminal acquisition or disposal of government landed properties before the appropriate court of law.

It is also to identify moveable and unmovable assets in possession of any person found to be culpable in misappropriation of state government’s property and or funds and forward them to prosecutors assigned by the State Attorney General for the purpose of obtaining court orders of forfeiture of the assets pending the determination of the criminal trials.

Bala Mohammed further charged the Committee to use anti-corruption agencies in the country such as the EFCC, ICPC, NFIC to recover every misappropriated fund while checks should be made at the CBN and other commercial banks to ascertain the actual revenue receipt to the state within the period of investigation.

The Governor then advised the Committee to peruse reports of previous committees set up by successive administrations to see the possibility of how to implement recommendations presented.

ALSO READ: NGO rises in defence of rights of women

The Committee Chairman stressed that the committee is not a new thing considering the fact that all previous administrations in the state set up similar committees and appealed to people of the state for cooperation to enable it to deliver as scheduled.

The Committee also has as members, Alh Bibi Dogo, Kamel Isah, Harsanu Guyaba, Barr Lawal Husseini Ibrahim, Alh Sani Shehu (Sanin Malam), Arc Baba Mohammed Dadi, Hon Maryam Garba Bagel, Professor Sylvester Shigyil (SAN) who is to serve as the SECRETARY while Barr Mukhtar Abubakar Usman is to serve as the Assistant Secretary of the Committee which has three months within which to complete its assignment and submit reports to the Governor .

It will be recalled that barely few weeks to end the immediate past administration, the 8th Assembly passed a law repealing the law enacted in 2015 for the recovery of looted funds and government properties but the former Governor, Mohammed Abdullahi Abubakar could not assent to the law till his tenure expired on May 29, 2019.