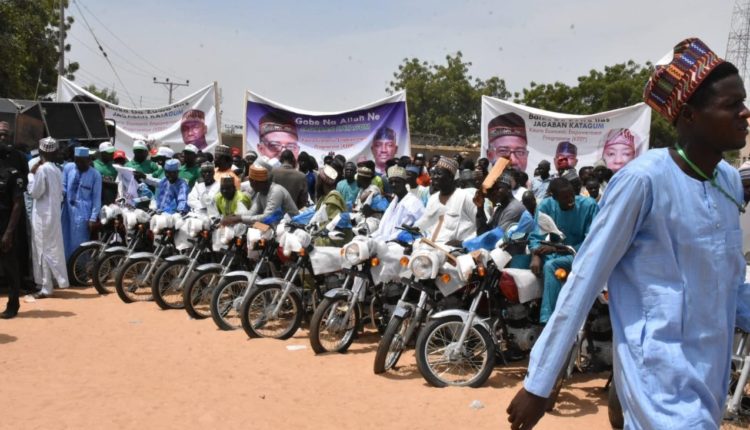 No fewer than 1000 beneficiaries mostly women and youths have been empowered by the Bauchi State Government with various items including cash amounting to the sum of N99 million.

The items include sewing and knitting machines, Talia making materials, motorcycles, vehicles, jerry cans of groundnut oil and others given out on Sunday at Itas-Gadau and Jama’are LGAs of the state.

State Governor, Sen Bala Mohammed on Sunday distributed the occupational equipment which he said was part of his social welfare scheme tagged ‘Kaura Economic Empowerment Programme’ (KEEP) designed to be implemented across the 20 local government areas.

The governor said in Itas Gadau that, the items distributed which included commercial motorcycles, cash capitals, grinding and sewing machines were worth N49 million.

According to him, N50 million was expended in the empowerment scheme in Jama’are saying his administration is mindful of the need to lift people out of poverty.

The governor further stated that a monitoring and evaluation mechanism was put in place to ensure that the occupational materials are not diverted but reach the right beneficiaries.

He then advised the beneficiaries to judiciously use items to boost their businesses and in turn get others to work for them which will make them gainfully employed as well as becoming employers of labour.

Bala Mohammed stressed that the aim of the programme is to reduce poverty in the state especially among women and youths who are the most vulnerable in the society and reiterated the commitment of his administration to gradually and relentlessly pursue economic empowerment programmes, aimed at alleviating the hardship of Bauchi citizens as a result of poverty.

The Governor also said that the Kaura Economic Empowerment Programme has already been launched in Zaki, Gamawa, Ganjuwa, Darazo, Bogoro and Tafawa Balewa local government areas of the state, adding that Itas-Gadau and Jama’are local government areas have now formally joined the economic Employment train of taking the generality of the majority of the people of Bauchi out of poverty.

He said that “I am therefore pleased to be here today to preside over the launching of this Programme in these two local government areas of the state. Having achieved major progress in the transformation of the infrastructure landscape of the state through the construction of roads, hospitals, schools and other services. it is the desire of our administration to also focus on the upliftment of the living standard of our people through this empowerment Programme”

The Governor further said that “As a responsive and responsible government, we are not unmindful of the need of the people to be economically empowered so as to optimally make use of the Infrastructures put in place” .

According to him, “The empowerment programme is deliberately designed to holistically address the problem of unemployment and alleviation of poverty”.

Bala Mohammed also said that his administration is desirous of making life more meaningful to the people of the state, stressing that his government will continue to give all the necessary support to all the poverty alleviation and economic empowerment agencies to effectively and efficiently discharge their responsibilities.

He then charged the beneficiaries to use the opportunity to establish their various businesses in order to become enterprises and employers of labour because according to him, that is the only way to check the unemployment rate in the state.

Speaking separately, the Council Chairmen of Itas-Gadau and Jama’are LGCs appreciated the Governor for bringing the empowerment Programme to their respective people agreeing that it will go a long way in alleviating poverty among the people.

Chairman of Itas-Gadau LGC, specifically said that being an agrarian area, people of the area require support from the state government to be able to be self-reliant and employers of labour among the youths and women.

The Council Chairman of Jama’are commended the state government for the various interventions in the area saying that the area had not had it so good in terms of development than now.

Buhari, Okowa petitioned over detention of 14 youths in Delta community since 2020