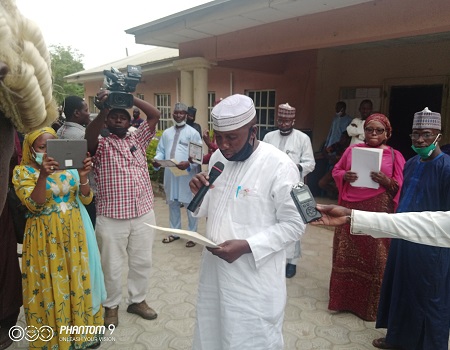 Bauchi State Governor, Sen Bala Mohammed Abdulkadir, has congratulated the newly elected leadership of the State Council of Nigeria Union of Journalists (NUJ) calling for professionalism and objectivity in the reportage of events in the State.

According to a statement by Mukhtar Gidado, Senior Special Assistant on Media and Publicity to the Governor, The governor stated that he has noted with pride, the maturity exhibited by all candidates and other members before during and after the elections.

The statement reads: “His Excellency, Gov. Bala Mohammed (Kauran Bauchi), the Executive Governor of Bauchi State, congratulates the Bauchi State Council of the Nigeria Union of Journalists (NUJ) on the successful conduct of its elections. As a veteran Journalist himself, Gov. Bala Mohammed has noted with pride the maturity exhibited by all candidates in the electioneering process”.

The governor further stated that the election was an indication that Journalists in Bauchi State practice what they preach having been able to conduct a rancor free elections.

The Governor while congratulating the new EXCO members urged them to work toward ridding the Journalism profession of quacks who masquerading as Journalists in the state thereby project the good image of the profession in bad light.

He also urged the new leadership to lead in fairness to all not minding the differences of opinions before and during the election but to strive to carry every member along to build a united union.