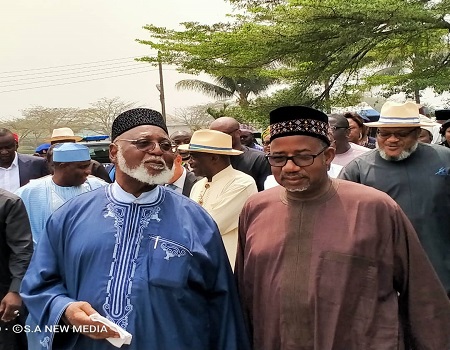 Former governor of Rivers State, Dr Peter Odili has been applauded for establishing PAMO University of Medical Sciences in the state with the aim of producing medical personnel for the health sector.

The commendation was made by the Bauchi State Governor, Sen Bala Abdulkadir Mohammed while he was speaking at the first Founder’s Day Ceremony of the University held at its premises in Port Harcourt on Monday.

A press statement by Lawal Muazu Bauchi, S. A New Media to the governor contained that while commending the former Governor for his foresight to initiate the establishment of the university, Bala Mohammed said that it will go a long way towards providing the required manpower in the country’s health sector.

The governor who spoke on behalf of the other states governors that attended the occasion assured the former Rivers State governor of their support to ensure the university achieved the set objectives.

Bala Mohammed further informed the gathering that his recent official visit to the United States of America was to seek for the support of stakeholders in the health sector in order to ensure effective healthcare delivery across Bauchi State.

The vision of the PAMO University of Medical Sciences according to the founder who is a medical Doctor is to be one of the foremost Medical Universities in Nigeria, recognised locally and globally for quality and excellence in health services, medical education and research.

Other personalities who were at the occasion included the former Head of State, General Abdulsalami Abubakar, Minister of Labour and Productivity, Chris Ngige as well as the governors of Sokoto, Oyo and the Adamawa States.