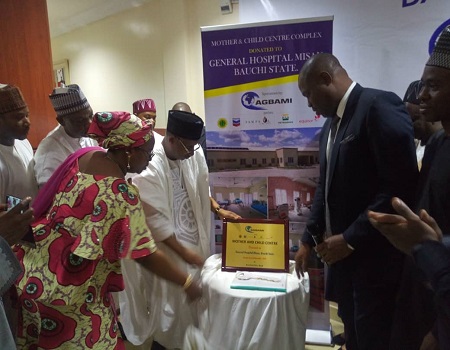 The consortium which is in Nigeria with a view to executing developmental projects across the country as part of their corporate social responsibility in the areas of Education, Health and the Economy constructed the Mother and Child Center Complex at the General Hospital Misau.

While handing over the facility to Bauchi State Governor, Sen Bala Mohammed Abdulkadir in Abuja the group assured that it will continue to execute more projects that will improve healthcare delivery across the Country, enhance quality education and improve the economic empowerment of youths.

Directors and Managers of Agbami Partners who spoke during the handing over ceremony applauded the state government for its support towards ensuring effective execution of their projects in the state.

A press release issued by the Governor’s Senior Special Assistant on Media, Comrade Muktar Gidado indicated that Governor Bala Mohammed while receiving the constructed healthcare facility in Abuja, expressed satisfaction with the partnership between the state government and the group.

Bala Mohammed applauded the partnership and described it as the fastest way of fast-tracking the availability of Healthcare delivery to the people of Bauchi State.

The Governor further said that the newly constructed facility provided by Agbami Partners will no doubt complement the efforts and resolve of his administration towards providing qualitative Healthcare services to the people of the state.

Bala Mohammed also said that the declaration of the State of Emergency in the Health sector is to overcome the challenges facing the sector as the state has suffered so much neglect in the provision of healthcare services in the past.

He, therefore, commended the immediate past Group Managing Director of the NNPC, Maikanti Baru for facilitating the construction of the Mother and Childcare facility in Misau Local government area of the state.

Earlier, the State Commissioner of Health, Auwal Jatau commended the Agbami partners for their commitment to improving the quality of Healthcare delivery in the state and acknowledged the efforts of Governor Bala Mohammed to tackle the challenges confronting the health sector in the State.

The Health Commissioner pledged to ensure proper maintenance of the health facility for the well-being of the beneficiaries.

Agbami Partners have executed projects in Bauchi state to include among others, construction of model classroom blocks fully – furnished and equipped at General Hassan Usman Katsina Unity College Bauchi.