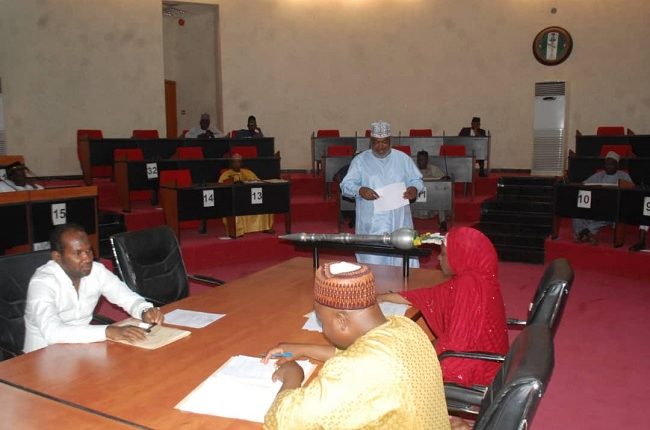 This followed the adoption of the report of the House Committee on Appropriation on the screening of Engr. Joshua Titus Sanga for appointment as Director General, Bauchi State Public Procurement Bureau which was laid by the Deputy Chairman of the Committee, Tijjani Muhammad Aliyu representing Azare/Madangala Constituency.

The Committee explained that after studying the curricular vitae of the nominee, he was invited to respond to some questions in order to determine his suitability for the position.

According to the Committee, the nominee was asked questions that bothered about his integrity, knowledge of Bauchi State Fiscal Responsibility Law 2017 as amended, Bauchi State Procurement Law, 2020 as amended as well as his plans and vision to ensure accountability, probity and transparency in the conduct of procurement in the State, which he responded to accordingly.

The Committee concluded that the nominee, an indigene of Toro Local Government, has pedigree, impressive curricular vitae and has satisfactorily answered all questions posed to him, therefore recommended for his confirmation.

Also under matters of urgent public importance, the member representing Disina Constituency, Saleh Hodi Jibir requested the emergency maintenance of a road that links Adamami, Disina, Jama’are and Itas/Gadau which is affected by flooding.

According to him, the road is very important to the communities in the area due its economic and social advantages, thus it needs emergency maintenance as it is currently unmotorable.

He requested that the House should ask the State Government to act urgently so as to repair the road and put it back to use for the benefit of the people of the area.

In his contribution, Majority Leader, Tijjani Muhammad Aliyu representing Azare/Madangala Constituency said that the road needs very urgent and serious consideration adding that the problem of flooding that is affecting roads is a global phenomenon, and affects all other parts of the nation

The Majority Leader added that as representatives of the people, it is incumbent on them to raise the matter since it affects their constituents.

He urged the Executive Arm that since the House has passed Bauchi State Infrastructural Maintenance Agency, the government should inaugurate it and provide funding for the Agency so that it can swing into action.

However, the Majority Leader lamented that he has been raising similar issues but nothing has been done, hoping that with the coming of this Agency, it can assuage this kind of problem after which the House adopted the motion.