Battle for NASS: It is no retreat, no surrender 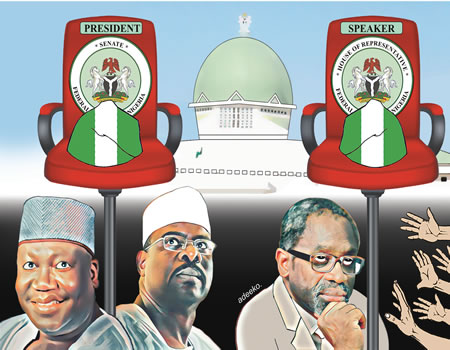 There are strong indications that Tuesday’s epic contest for the positions of Senate President and Speaker of the House of Representatives will be a fight to the finish among the leading contenders for the leadership of the National Assembly.

The battle for the Senate presidency appears a straight fight between the anointed candidate of the All Progressives Congress (APC) leadership, Senator Ahmed Lawan from Yobe State against Senator Ali Ndume from Borno State.

While Honourable Femi Gbajabiamila and his main rival, Mohammed Bago, are the leading contenders for the speakership of the House of Representatives, four other aspirants have dared the APC leadership and vowed to slug it out with the party’s choice, Gbajabiamila.

Findings revealed that the leading aspirants have been involved in rigorous lobbies for the electoral endorsement of their colleagues in the last one week and are laying claims to enjoying overwhelming support.

It was gathered that the caucus of Peoples Democratic Party (PDP) Senators-elect may have thrown its weight behind the candidature of Senator Ndume, even as it was said to have directed its members “to ensure victory for candidate that will serve national interest.”

Sources told Sunday Tribune that the PDP caucus, at its meeting at Senator Ike Ekweremadu’s Abuja residence, on Saturday, “considered the hostile disposition of APC and resolved to stand with candidate that is considered not overtly partisan but nationalistic.”

“We actually met with the two. We met with Senator Ali Ndume first at 9:00 p.m and later with Senator Ahmed Lawan. Both gentlemen are eminently qualified, but we also have to look at the one that will serve national interest,” an inside source said.

According to the source, “contrary to what you guys are reporting, we are not asking for Deputy Senate President position. We are not sharing position with APC, but we want the best for Nigeria, and l won’t say more than that”, the source quipped.

The race for the Senate Presidency took a new turn on Friday when Senator Danjuma Goje withdrew from the race, after a meeting with President Muhammadu Buhari.

APC controls simple majority with 52 Senators, while PDP has 44, but a block vote from the opposition PDP is expected to determine who wins on Tuesday when the Senate is inaugurated.

Meanwhile, about 99 out of the 109 Senaators are said to have signed to vote for Senator Lawan to emerge the next Senate President.

Chairman of the Senator Ahmad Lawan Campaign Organisation, Yahaya Abdullahi, made this known on Saturday, while presenting a five-page endorsement list containing the names, signatures and parties of the 99 Senators to Lawan.

Speaking after receiving the list, Lawan, who showered encomium on PDP Senators-elect and all who have endorsed him and agreed to vote for him, including APC Senators, expressed optimism that he would get more endorsement before the inauguration.

He disclosed that between 35 and 39 PDP Senators-elect have already agreed to vote for him on Tuesday, just as he expressed commended the court ruling in favour of former Governor Rochas Okorocha of Imo State.

He explained that all the Senators-elect were contacted individually, irrespective of the political affiliations, adding that: “it was a conscious decision not to have their signature on the endorsement paper.”

For the speakership, a loyalist of the Honourable Bago, who spoke with Sunday Tribune in confidence, dismissed  a claim that the governors are unanimous in their support for the Gbajabiamila project, described such claim as misplaced and unfounded.

He further argued that majority of the governors, who claimed to be working for Gbajabiamila in the open, are actually driving the Bago project.

“You ask yourself, why are they not mounting pressure on Bago to step down? The same governors that took Senator Danjuma Goje to the Presidential Villa to meet with President Muhammadu Buhari  and right there, he suddenly announced his withdrawal.

“I can tell you that none of the governors has talked to Bago to throw in the towel because that is where their hearts is. Even the so-called endorsement of Gbajabiamila by North-Central  governors where Bago comes from was a grand deception,” he said.

On speculation that certain governors of the PDP are working in league with their counterparts in the APC to talk their lawmakers elect to buy into the Gbajabiamila ambition,  the party source said: “ Don’t be deceived! No PDP governor is working for Femi Gbajabiamila. It is all lies.

Meanwhile, the South-South zonal executive of the APC has backed Senator Ovie Omo-Agege, representing Delta Central, for the position of deputy senate president.

In a statement signed by Honourable Ntufam Hillard  Eta and David  Okumagba, zonal chairman and secretary, respectively, the zonal leadership said they settled for Senator Omo Agege since Edo State has produced the current national chairman of the party, Adams Oshiomhole.

The statement said further “implore all Senators to please stand by us and support Senator Ovie Omo Agege for the position of Deputy Senate President.”

Battle for NASS: Pressure mounts on Bago, 4 others to step down for Gbajabiamila