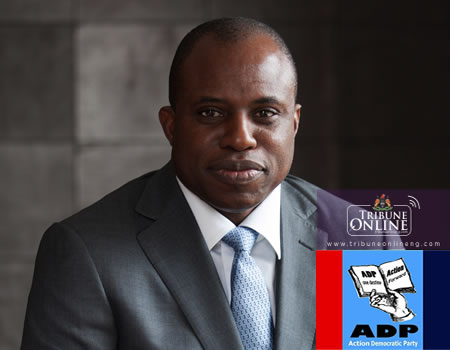 The governorship candidate of the Action Democratic Party (ADP) in Ogun State, Hon. Dimeji Bankole, has expressed worry over the high rate of unemployment level in the state

He made this known at a media parley on Friday in Abeokuta, the state capital, that the focal point of his party is massive employment opportunities, saying that 2016 National Youth survey conducted by the National Bureau of Statistics put the state at 56 per cent of unemployment level.

The former Speaker of the House of Representatives noted that much as not been done by the government in power since then till date and that such development portends great danger for the state if not addressed.

“One of the areas that are of great concern to me and our political party, the Action Democratic Party is the level of unemployment in our state which the 2016 National Youth Survey report of the National Bureau of Statistics put at 56 per cent. Since then, not much has been done to address the menace. Unless urgent action is taken to create sustainable employment, we are sitting on a keg of gunpowder,” he said.

He also promised that his administration would make the local government council areas working by ensuring free flow funds to the grassroots so as to generate employment.

The governorship candidate dismissed insinuations that he was in the race to wet the grounds for the 2023 elections, saying he was on the race to win.

Bankole added that his party is sure of victory going by the number of followership built in the last five years, submitting that ADP has been quietly forming its structures from the polling units to the wards, local and state levels.

“I am aware that there are insinuations from. some quarters that I am wetting the ground for 2023. Unfortunately, such erroneous impressions are from those who are unaware of the fact that the machinery for the actualisation of this project was put in motion five years ago.

” We have been quietly building our structure across the state. We are fully prepared for this election. We are equipped with the needed experience and endearing track record which clearly put me ahead and above other contenders in the race,” he said.

Anyone above 65 years has no business in governance —ADP chairman