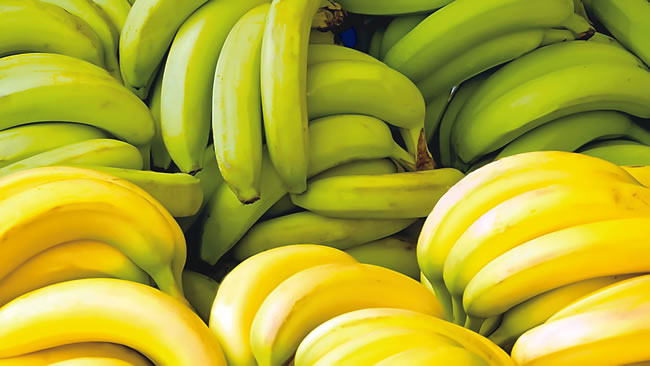 BANANA is one of the oldest and best known fruits. It is delicious and seedless and is available in all seasons at a price that is within everybody’s reach. It is a very hygienic fruit as it comes in a germ-proof package. Its thick covering provides an excellent protection against bacteria and contamination. The mature fruits vary in sizes and may be greenish. yellow or reddish in colour.

Original home of banana is believed to be India and Malaya. The fruit as well as its plant is considered to be very auspicious in all the religious and social ceremonies in India. In the mythological ages in Europe, it was called the ‘apple of paradise.’

Studies have revealed that the banana contains a large amount of easily assimilable sugar, making it a good source of quick energy and an excellent means of recovery from fatigue. It has a rare combination of energy value, tissue-building elements, protein, vitamins and minerals. It is a good source of calories being richer in solids and lower in water content than any other fresh fruit. A large banana supplies more than 100 calories.

The banana constitutes almost a complete balanced diet in combination with milk. It contains a high grade protein, which includes three of the essential amino acids. Banana and milk supplement each other in an ideal manner and provide all the needed nutrients to the body.

In a study  published in the Journal of Indian Medical Plants, experts revealed that the banana contains numerous health benefits than it appears.

In the traditional medicine of India and ancient Persia, this golden fruit is regarded as nature’s secret of perpetual youth.

To this day, banana is known for promoting healthy digestion and creating a feeling of youthfulness. It helps promote the retention of calcium, phosphorus and nitrogen-all of which then work to build sound and regenerated tissues. Banana also contains invert sugar, which is an aid to youthful growth and metabolism.

The banana is used as a dietary food against intestinal disorders because of its soft texture and blandness. It is said to be effective against ulcer. ‘It is the only raw fruit which can be eaten without distress in chronic ulcer cases, because it neutralises the over-acidity of the gastric juices and reduces the irritation of the ulcer by coating the lining of the stomach’, Dr H.K Bakhru disclosed.

Ripe bananas are highly beneficial in the treatment of ulcerative colitis, being bland, smooth, easily-digestible and slightly laxative. They relieve acute symptoms and promote the healing process.

Bananas are of great value both in relieving constipation and diarrhoea as they normalise colonic functions in the large intestine to absorb large amounts of water for proper bowel moments.

Their usefulness in constipation is due to their richness in pectin, which is water-absorbent, and this gives them a bulk producing ability. They also possess the ability to change the bacteria in the intestines-from the harmful type of bacilli to the beneficial acidophyllus bacilli.

Mashed banana together with little salt is a very valuable remedy for dysentery. According to Dr. Kirticar, a combination of ripe plantain, tamarind and common salt is most effective in this disease. He claims to have cured several cases of both acute and chronic dysentery using this.’ Ripe bananas are also very useful in dysentery of children, but they should be thoroughly mashed and beaten to cream before use in these cases.

Banana is useful in the treatment of arthritis and gout. A diet of bananas only for three or four days is advised in these conditions. The patient can eat eight or nine bananas daily during this period and nothing else.

Being high in iron content, bananas are beneficial in the treatment of anaemia. They stimulate the production of haemoglobin in the blood.

The fruit is very useful for those who are allergic to certain foods and who suffer from its consequences such as skin rashes and digestive disorders. Unlike other proteinous foods, many of which contain an amino-acid which these persons cannot tolerate and which causes allergy, bananas contain only benign amino-acids which in most cases are not allergic. According to Dr Bahkru, the fruit, however, does cause allergic reactions in certain sensitive persons and they should avoid it.

Bananas are valuable in kidney disorder because of their low protein and salt content and high carbohydrate content. They are useful in uraemia. a toxic condition of the blood due to kidney congestion and dysfunction. In such cases. a diet of bananas should only be taken for three to four days. consuming eight to nine bananas a day. This diet is suitable for all kidney troubles. including nepthritis.

Bananas are considered useful In the treatment of tuberculosis. According to Dr J. Montelvz of Brazil, the juice of the plantain or the ordinary cooked bananas works miracles in the cure of tuberculosis. He claims to have cured patients with advanced stage of tuberculosis with frequent cough, abundant expectoration or phlegm and high fever in two mouths by this treatment.

Juice from banana stem is a well-known remedy for urinary disorders. It improves the functional efficiency of kidney and liver thereby alleviating the discomforts and diseased conditions in them. It clears the excretory organs in the abdominal region of toxins and helps to eliminate them in the form of urine. It has been found to be of great help in the treatment for the removal of kidney stone. It is advisable to mix this juice whenever possible with the juice of ash pumpkin.

A diet consisting of bananas and skimmed milk is considered an effective remedy for weight reduction. In prescribed course of diet treatment, the daily diet is restricted to six bananas and four glasses of skimmed milk or buttermilk made from skimmed milk for a period of 10 to 15 days. Thereafter, green vegetables may be introduced gradually. Reducing the intake of bananas from six to four. This prescribed course of diet treatment can be continued till the desired results are achieved. Bananas are suitable for overweight people as they contain practically no sodium.

Use of personal protective equipment in Oyo hospital unsatisfactory —Study