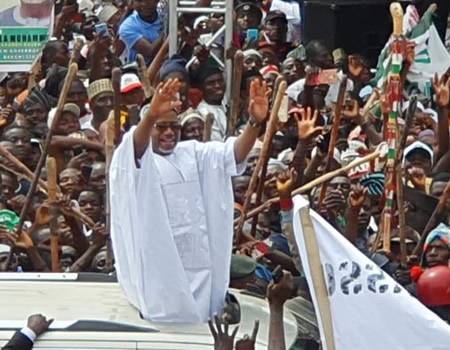 The Governor of Bauchi State, Alhaji Bala Mohammed, on Wednesday took his oath of office and was sworn in on Wednesday at Abubakar Tafawa Balewa Stadium, Bauchi.

The Independent National Election Commission on March 26 declared Mohammed, the candidate of the Peoples Democratic Party (PDP), the winner of the Bauchi State Governorship Election after a protracted contest.

The election first conducted on March 9 was declared inconclusive and subsequently, numerous controversies followed, among which was the suspension of counting of ballots.

The acting Chief Judge of Bauchi State, Justice Rabi Umar, administered the oath on the governor and his deputy.

The governor said after the swearing-in ceremony that he inherited a debt of N96 billion from the previous administrations.

He claimed that the immediate past administration incurred additional N40 billion to bring the figure to N136 billion.

“The unfortunate impact of this is that debt servicing will now significantly encroach on funds and short-change our cash flow.

“It means we shall be compelled to seek financial support for ambitious economic recovery plan; the difference, however, is that for every naira we attract, there shall be the commensurate return on investment,” Mohammed said.

He gave an assurance that under his watch civil servants’ salaries would be on first line charge.

The governor said steps would be taken through a committee of all stakeholders to devise ways and means of ensuring regular payment of gratuities of workers and settle outstanding balances.

Mohammed said his administration would focus on completing on-going projects as well as executing news ones.

He pledged to involve technocrats and professionals across party lines and labour leaders to draw up an agenda that would jump-start the economic transformation plan of his administration.

He commended the people for their sacrifice during the general elections, saying the doggedness of the leaders of PDP made the current change of leadership in the state possible.