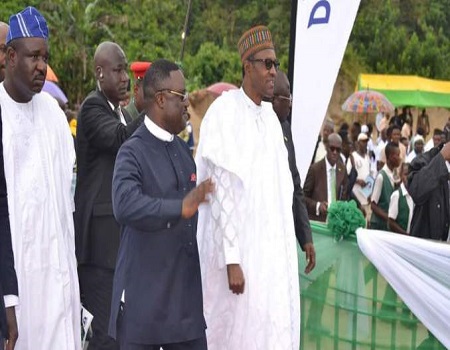 THE Cross Rivers State Governor, Ben Ayade has held talks with President Muhammadu Buhari’s Chief of Staff, Abba Kyari in the Presidential Villa, Abuja over the Bakassi Deep Sea Port and the 260km Super High Way projects in the State.

Ayade who briefed State House correspondents shortly after the meeting with Kyari, at the weekend, expressed commitment to complete the ongoing projects before the expiration of his second term tenure in office.

The Bakassi Deep Seaport and the 260km superhighway projects which have since received Presidential nod are reportedly estimated to cost about N700 billion.

The visit, according to the governor was part efforts to secure the commitment of the Federal Government on completion of the projects.

He said: “Ayade will not start anything that will not succeed; the Super Highway and the Deep Sea Port must come into reality before I leave office; it is a commitment that I am emotional about.

“I am ready to give my all to get it fulfilled and I believe that the President, at the right time will come to my rescue if it becomes difficult,” he said while fielding questions from State House Correspondents on the status of the Project.

Ayade also explained that the Super Highway project currently ongoing, with visibility away from public view, saying it “is a brand new road, you do not see it from the road and we are not in a habit of dramatizing it”.

He also shed light on the Bakassi Deep Sea Port, which he said was the only port in Nigeria with an evacuation corridor; and a six-lane superhighway taking good directly to Northern Nigeria.

“What Cross River is trying to do is take the Atlantic Ocean closer to Northern Nigeria,” he noted.

He pledged to relocate to the site during the dry season to facilitate the speedy completion of the multi-billion naira projects aimed to also aid transportation of farm produce from the northern part of the country to the South and vice-versa.

“When the dry season comes, I am relocating to the Super Highway because what we have done is to segment it into 50km each and allow investors who are interested to the beat.

“Do it; put your toll gate and recover your money because it is a private road; it is a road that has never existed; it is not a federal road; it is my initiative and the whole idea is that the Northern part of Nigeria particularly, the North-East and North-West cannot see the desired prosperity unless they get access to the deep seaport; otherwise, the wonderful sesame seed we have in Borno and Yobe lie prostrate; the solid minerals we have in the North-East is lying waste because you cannot travel 2000km to a seaport carrying such materials on road.

“Definitely the Super Highway will shorten all of that. The coal deposit is unexploited; so you see Nigeria sitting in huge want particularly for Northern Nigeria without anybody extracting. I believe that the Super Highway and the Deep Sea Port are supposed to be Federal Government’s project at this time particularly with the potential that it will succeed.”

The Cross River State governor who harped on the need for Nigeria to deploy digital technology to develop the country’s agriculture sector, noted: “any person who cultivates rice either at commercial or sustenance quantity using seeds is analogue, old fashioned.”