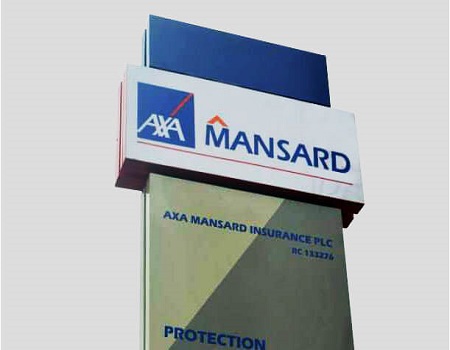 AXA Mansard Insurance plc, a member of the AXA Group has announced its financial results for the half-year ended June 30, 2020, grew profit after tax by 180per cent translating to of N4.4bn from N1.6bn recorded in June 2019.

The company grossed N30.54billion in Gross Written Premium up by 4per cent from N29.36billion in June 2019.

Key Ratios, according to the firm, include an operating expense Ratio which dropped marginally to 11per cent 2020 to June 2019 or 13per cent. Underwriting Expense Ratio of 7per cent dropped from 8per cent in June 2019.

Commenting on the results the Chief Financial Officer, Mrs Ngozi Ola-Israel,  said “In this half-year, we delivered 4per cent growth in gross revenues and a remarkable 154per cent growth in profit after tax driven by our continued focus on increasing technical and operational efficiencies.

“We remain committed to partnering with our customers to find ways to remain supportive of their business as we wade through this challenging period.

Commenting on AXA Mansard’s financials at the end of June 2020, Mr Kunle Ahmed, the Chief Executive Officer of, AXA Mansard Insurance, said “AXA Mansard has demonstrated resilience in the challenging context of the Covid-19 pandemic, in the first half of 2020.

“Growth in Health lines remained strong and continued to accelerate throughout the first six months of the year.

“The Covid-19 pandemic has shown the critical role of insurance in protecting societies and supporting economic recovery, we will continue to proffer solutions to ease the pain points of our clients”

The AXA Group is a worldwide leader in insurance and asset management, with 160,000 employees serving 108 million clients in 57 countries.

AXA had Euro 969 billion in assets under management as of December 31, 2019. The AXA ordinary share is listed on compartment A of Euronext Paris under the ticker symbol CS (ISN FR 0000120628 – Bloomberg: CS FP – Reuters: AXAF.PA).

AXA’s American Depository Share is also quoted on the OTC QX platform under the ticker symbol AXAHY. The AXA Group is included in the main international SRI indexes, such as Dow Jones Sustainability Index (DJSI) and FTSE4GOOD.

SPE calls for review of marginal bid round programme

Developing TikTok profile and making videos known worldwide: how do you do it quickly and efficiently?