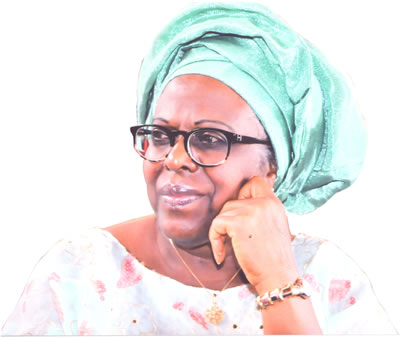 The co-chairman of the African Newspapers of Nigeria (ANN) Plc, has donated Idotun road project in Ikenne-Remo, Ogun State, to the Ikenne community through the Ikenne Development Association.
The former Ambassador to Netherlands said the initiative was borne out of her desire to contribute her quota to the development of humanity.
Awolowo Dosumu who is the Executive Secretary of the Obafemi Awolowo Foundation appreciated the IDA for ensuring that the project became a reality.
The donor was full of appreciation to God for using her to affect positively on the lives of others in her own little way.
She said, ” We should allow God to use us to affect the lives of others . I thank God for using me to facilitate this project for the development of Idotun community in Ikenne to make people happy.”
The President, Ikenne Development Association, Chief Sola Odumosu, said the project was facilitated by Awolowo Dosumu, who was the chairman of the 2016 Ereke Day celebration.
He said that the donor through financial support from her friends and associates started last March, and that a total deviation from the construction of drainages by the association.
Odumosu told the gathering which had in attendance the Alakanne of Ikenne-Remo, Oba Adeyinka Onakade, the Oludotun of Idotun-Ikenne, Oba Odunayo Solarin, Chief Idowu Sofola (SAN), the Iya Ijo of Our Saviour Anglican Church, Chief (Mrs) Comfort Olutunda, Mr. Omotayo Odumusi, the chairman of Ikenne Local Government Area, Rotimi Akinsanya, that the project was estimated to cost N5million.
He explained that project would further spur the Association to do more for the town, thereby calling on sons and daughters of Ikenne town to support the cause of development.
Odumosu commended Ambassador Awolowo Dosumu for the gesture which he said would forever be appreciated by Ikenne people.
The IDA President said, “At the grandfinale of the 2016 Ereke Day celebration, i conceived an idea that we have never done a road project as an association before. The least we have done is the construction of drainages .
“When we made her the chairman of the annual celebration, i told her that we have a project which we would like to execute a road ptoject and she consented. We received financial support from her friend and we opened a special account for it.
“We are happy that this project came into being. The project was estimated to cost N5m, but we have spent more than the money so far due to the high cost of materials.
“This is the beginning of other great things to come to Ikenne. We will not rest on our oars in ensuring that other roads within the town that needed attention are attended to.”
Also speaking, the Ikenne LG, Rotimi Akinsanya, said that government would continue to complement the efforts of Development Associations in the council area.
He noted that the IDA was quite different from others in the local government considering the number of projects so far embarked on by it.
The Alakenne of Ikenne prayed for the peace of the town and encouraged the Association to continue in its mission to develop the town, while she appreciated the donor.
Sofola in his remarks said he was not surprised by the donor’s sterling qualities of Mrs Awolowo Dosumu, describing her as a chip off the old block.
While Chief (Mrs) Olutunda charged her to use her connection with the well to do in the society to change the face of the town.