Located in Iragbiji, Osun State, the Abeni Visual and Performing Arts Institute (AVPAI) of the master artist is quietly empowering youth across Nigeria.

GREATER love has no one than this: to lay down one’s life for one’s friends”, says the holy book. While the renowned master artist and frontline member of the Osogbo Art Movement, Chief Muraina Oyelami is not precisely dying for a friend, he’s doing something close. He’s flirting with financial ruination and damning the consequences, all for the sake of humanity.

The 76-year-old Eesa of Iragbiji, who shouldn’t be working so hard, has commenced an art empowerment project for the youth named Abeni Visual and Performing Arts Institute (AVPAI). He has sunk all of his life savings into it.

Oyelami’s AVPAI occupies over an acre of land in his native Iragbiji, Osun State. And as the name suggests, it is divided into visual and performing arts. Aso Oke weaving, batik, tie-dye, fashion design and embroidery are all under the textile arm. Theatre theory and practical, dance and choreography, drum making and drumming are taught in performing art. There’s also screen-printing compulsory for all trainees.  There is a big theatre under construction and a relaxation spot for people interested in quenching their thirsts.

The Institute’s Director of Administration, Muyiwa Oyewole, takes us on tour. We interact with students quietly going about their chores. They are from different Nigerian states; Lagos, Oyo and Osun, among others. Tour over, it’s time to engage Oyelami over his decision to put all of his eggs, as it were, into a basket.

The origin of AVPAI, naturally, was the starting point.

Oyelami, a journalist’s delight, began: “I believe in archival materials; I record a lot of things. I became interested in documentation because of what I learnt from Ulli Beier. He did a lot of documentation, so I have so many recordings. I had documented this centre, AVPAI, a long time ago but it wasn’t called AVPAI then. Six or seven days ago, I was looking through my documents, and I came across one talking about a dream that I have. I had hoped that there would be a time and a place to empower youth because I know how I grew up and how I got to Mbari.

“One day, I was coming from the North, driving myself. It was around 3 pm, and I saw lots of children coming out of school. It dawned on me; what are these people going to be doing after finishing? More than half of them won’t continue, and I knew how I grew up. I said there must be a way of helping these people. That was when I started nurturing that idea; that one day, I’ll empower the youth. Those who stopped their education– temporarily can’t continue; that vacuum could be filled by what’s happening. By the time they leave, they can return to school and whatever they may have learnt, can be useful to them, making little money to be self-sufficient. 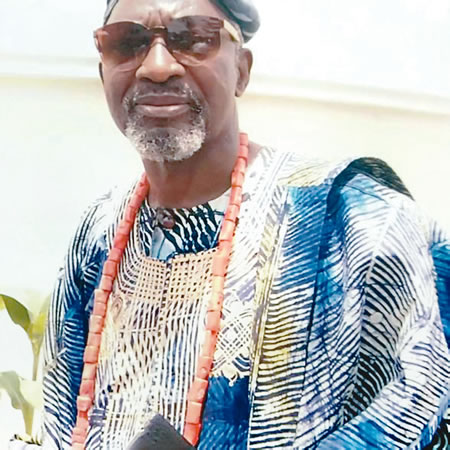 “That’s what led me into AVPAI. And I’ve spent all my life savings. Now, I’m penniless but thank God people who understand what I’m doing, not because of AVPAI; people show more interest in my work. The other day, Nike Okundaye, my very good sister sent me some money for a job that I’ve not done, and it came at the very right time. The carpenter was crying for his payment so immediately I got the money, I paid him. God has been so kind to me, and I’m happy my dream is coming through. I hope it will become better; I want the best for that Institute.”

On the choice of Abeni, he disclosed that he named the Institute for his mother.

“Abeni is the oriki (cognomen) of my mother. I love her, and I love my father equally, but she as a mother carried me inside her womb for nine months. And I’m her only surviving child; no brother, no sister. If you get to Ada, you will see Abeni Guest House. The plate number of one of my cars is MUNIRAT, that’s her real name. Abeni is her oriki, and I’m glad it’s happening.”

After much preparation, AVPAI took off formally in February 2020, with participants spending a minimum of three months.

Why three months, one posed to him?

“You have to arouse the interest of the participants, so the introductory course is three months. By the third month, the individual will now see if s/he has learnt enough or if s/he wants to learn more. And the larger percentage want to learn more. You have the basics in three months, but you have a better advantage if you spend six months or one year,” he offered.

He also explained why screen printing is compulsory for all participants. “We believe that if you specialise in Aso Oke weaving, and complete the training, you may not have constant customers. If you know screen printing, and there’s a naming or wedding ceremony in your neighbourhood, people will want souvenirs you can make. That’s why I made screen printing compulsory for every participant. It may not be their area of specialisation, but they will learn it. And it might even be the one that gives them money to survive.”

Tuition at AVPAI is free. The trainees enjoy the best of facilities; a school bus and modern hostel with excellent facilities. They also have approachable multi-skilled instructors as Oyelami strives to give them skills that would last a lifetime.

Successfully running the Institute is all that matters to Oyelami, the Prime Minister of Iragbiji. He has no other expectations. If other supporters come, they are welcome. If they don’t, he will continue to bear his self-appointed task stoically. But seeing that long-documented dream come alive several years after conception gladdens his heart.

“I’m realising my expectations. To make the Institute happen, and it’s happening through the grace of God. Of course, there’s this appeal I made to the government that we want to empower people. I said let’s empower at least five students from each local government, and they said no. They could only take three from each local government. So, they said they were going to support. Some of them made contributions; most of them didn’t even understand what we meant because they were not interested. But that can’t deter me. If I could survive since February 2020, I think I’m going to survive. Our youth are our future; we need to look out for them. Nothing else matters.”

Happily, the beneficiaries are not ungrateful. “When I first arrived, I was sceptical about what they could teach me, but after some weeks, I realised it’s lifelong empowerment. Once I have the fashion designing skills, no one can take them from me. I have spent just two months, and I can make bags and sew cloth well. That means there’s no hunger in my life again. I can also teach and empower others. Coming to AVPAI has been a blessing,” said Mrs Lydia Abosede, a trainee from Ilesa.

It’s the same positive story for Omolola Adisa, who combines performing art with fashion. “I commenced the three-month training last February and had completed it. I decided to return to further improve my skills, and it’s been a rewarding time,” she said.