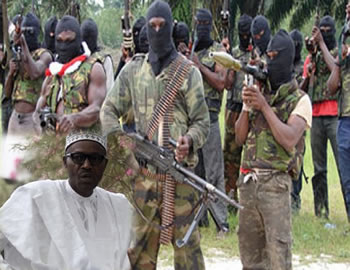 Members of the Niger Delta Avengers (NDA) have described as lies the purported arrest of members of the militant group by the Department of State Security (DSS) as reported in most national dailies, on Saturday.

The militant group in a post on their website on Saturday, denied the arrest, branding DSS as lairs who are deceiving President Muhammadu Buhari and Nigerians.

The group said the so-called suspects, Mr Christian Oluba, a.k.a Sensor and Selky Kile Torughedi, were sleeper agents of the DSS detailed to go after the avengers, but had fallen out with the security agency.

The dreaded saboteurs of Nigeria’s oil-economy added that after the suspects could not accomplish the task detailed them, the DSS had to rope in the suspects who are now demanding payment of money agreed on.

The group admonished President Buhari to focus on addressing the problems of underdevelopment, environmental degradation, lack of infrastructure and the issue of self-determination causing agitation in the region.

The statement reads thus: “Reports from National dailies that two suspects Mr Christian Oluba alias Sensor, and Selky Kile Torughedi arrested by DSS are alleged members of Niger Delta Avengers  is laughable, the fact is they are sleeper agents of the DSS sent after the Niger Delta Avengers.

“The boys has the right to demand for their money from DSS, why not pay them instead of arresting and labeling them as Niger Delta Avengers members.

“If  DSS  are denying this, let them allow the suspects to speak to the press. We (Niger Dleta Avengers) don’t have any connection with these boys. We dare the DSS to allow the boys to tell the world their side of the story.

“DSS and Nigeria Army can’t win the Niger Delta war by feeding their President with false information about situation of things in the Region.

“It’s all-good because as it seems the DSS is now having internal crisis with most of their sleeper agents and it a sign that God is on our side.

“There are problem in the Niger Delta region such as underdevelopment, environmental degradation, lack of infrastructure and the issue of self-determination.

“These are the areas Mr. President should focus on, not  arresting their allies and linking them to Niger Delta Avengers.

“This is to DSS Director Lawal Daura,  this the holy month of Ramadan and as a Muslim you hold it to Allah and the Nigeria people to say the truth. Why not come out with the truth.

“To the Nigeria press, there is always two sides to a story.  Why not try to get the other side of the story by interviewing the boys.

“The Nigeria army will never get us (Niger Delta Avengers), let them go and settle with their sleeper agents and stop deceiving the general public and their President.”

It will be recalled that a statement issued on Friday by Tony Opuiyo, on behalf of the Service, announced that one of the suspected NDA, Christian Oluba, a.k.a Sensor, was arrested while perfecting plans to carry out explosive attacks on critical oil and gas pipelines, including critical storage points.

The security agent added that it arrested another suspected militant, one Selky Kile Torughedi, on 17 June, 2016, in Calabar, Cross River State.

DSS described Torughedi as an ex-militant and suspected member of the Niger Delta Avengers (NDA) who was arrested while planning to assassinate one M.B. Yahaya, a serving military officer.

The security agency said Torughedi was a close associate of Government Ekpemupolo (aka Tompolo) and had already conducted surveillance at the residence of Yahaya in Kaduna, preparatory to his plot when he was intercepted.

Torughedi, the DSS alleged, was also a sponsor of pipeline vandalism in some states in the South-South region and was said to be helping the security outfit with further investigations.