Top News
By Ebenezer Adurokiya and Tunde Dodondawa On Oct 25, 2016 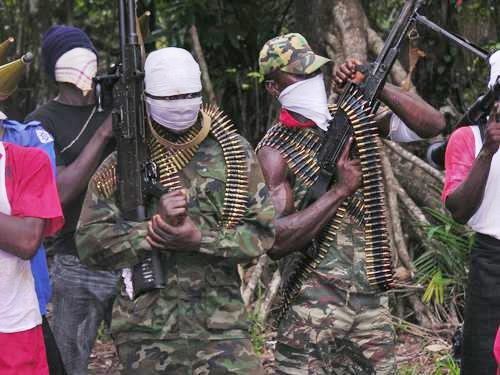 Few days to the proposed dialogue with elders and leaders from the Niger Delta over renewed militancy, dreaded Niger Delta Avengers (NDA) has announced that it has attacked the Escravos Offshore Export Pipeline in Warri South Local Government of Delta State operated by Chevron Nigeria Ltd.

In a statement issued on Tuesday and signed by the group’s a spokesperson, Brig. Gen. Mudoch Agbinibo, the group said its Strike Team 06 executed the economic sabotage at the early hours of Tuesday because of its warning that destroyed oil and gas facilities should not be fixed.

“Today, at about 3:45a.m, our Strike Team 06 took down Chevron Escravos export pipeline at Escravos offshore.

“Any attempt to use dialogue to distract us so as to allow the free flow of our oil will halt the dialogue process,” the militant group warned.

Meanwhile, an officer with Nigerian Navy Ship (NNS DELTA), who spoke on condition of anonymity, confirmed the attack, but said it was minor.

“It was an economic sabotage, but it’s just a minor thing. I’m sure our men have been mobilized there.

“The incident happened early this morning around Escravos,” the officer noted, adding that no suspect has been arrested in connection with the sabotage.

It will be recalled that the dreaded Avengers bowed to pressure to cease hostilities in August and have been honouring the agreement, but not without occasional tantrums thrown at the Federal Government  and oil multinationals.

The group has, in its requests, called for a restructuring of the country, resource control and the implementation of the masterplan for the development of the Niger Delta region, among others.

To press home their demands, members of the dreaded group made good their earlier threats to ground the oil economy of the country through the bombing of oil and gas facilities domiciled in the region.

Vice President Yemi Osinbajo, at several fora, confirmed that the current economic recession the country is plunged in was largely caused by the direct activities of militants in the region.

The Federal Government recently bowed to pressure to open dialogue with leaders and elders of the region under the umbrella of Pan Niger Delta Forum led by Chief Edwin Clark and the meeting has been slated for October 31.

Quite unusual, menders of the NDA expressed their approval of the dialogue led by Clark, but warned that its submissions and reasons for agitations must be at the front burner of the discussion.

Third runway at Heathrow cleared for takeoff by ministers