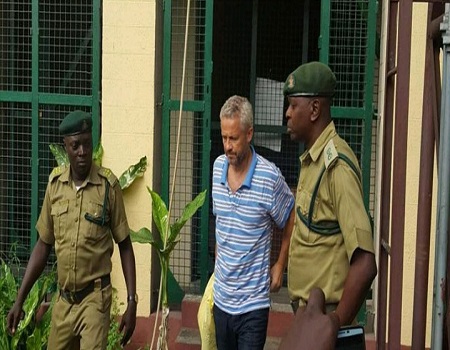 THERE appears to be more trouble for the Danish man, Peter Nielsen, who is standing trial for the alleged murder of his wife Zainab Ali Nielsen, popularly known as Alizee and her daughter as the autopsy report has revealed that the late artiste was hit in the head.

Forensic investigations also revealed that blood stains were wiped out n the surface of the couple’s Banana Island home.

The state police boss, Imohimi Edgal, while speaking on the update of the prosecution of the Danish man for murder said the police were not leaving anything undone to ensure that the case is properly investigated and prosecuted.

CP Edgal said, “the following information on the murder that took place in Banana Island is hereby released to the members of the public.”

The police boss continued that “Recall that on 11/04/2018, Mr Peter Nielsen, alleged to have murdered his wife, Mrs Zainab Nielsen and daughter was charged to Yaba Magistrate Court.“

He also continued that “ the autopsy report revealed that Mrs Zainab Nielsen suffered trauma as a result of the impact on her head.“

The Lagos state police boss also stated that “Secondly, the forensic experts revealed that there were blood stains from the couple’ s bedroom to the kitchen. though it was cleverly wiped from the surface of the floor, they were still able to detect it with the application of special chemical reagent.“

“In addition, blood stains were also discovered on the wash hand basin and on the towel, the suspect used in wiping his hands after the commission of the offence “ the Lagos police commissioner also said.

He added that “although it was cleverly cleaned up as well the experts were able to discover that too.“