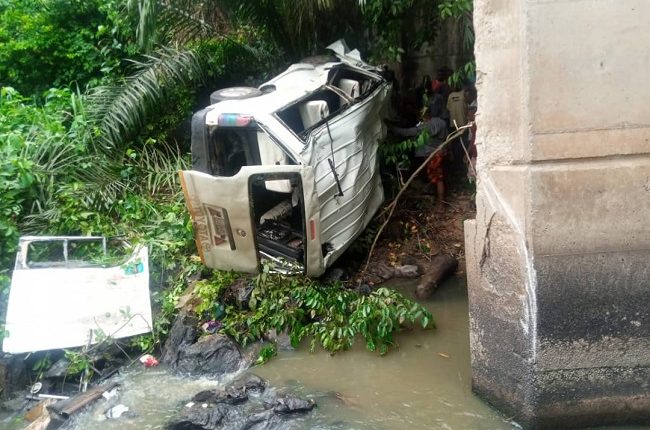 At least five people, including a newly wedded man, were confirmed dead in an auto crash that occurred in Aponmu village in Akure South Local Government Area of Ondo state along Akure /Ondo road on Sunday.

The 18-seater bus, with registration number Lagos AAA 859 XC which took off from Lagos, plunged into the Owena river, some ten kilometres to Akure, killing at least five people on the spot, including the driver.

According to an eyewitness, who said the driver lost control of the vehicle while on top speed during the rain and plunging the bus and the passengers into the river from the bridge which is about 25 feet from the surface. 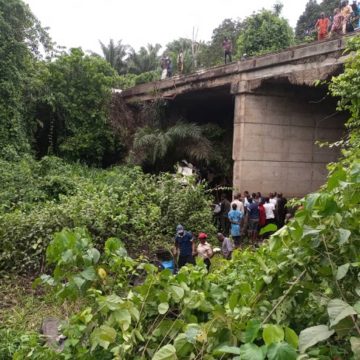 He said the passengers and the victims were in the vehicle for over an hour before help could reach them, while some of them were still trapped in the vehicle as at 5 pm.

He attributed the late response to the rain, saying the vehicle hits the rock at the bottom of the river and causing great damage to the vehicle and responsible for the death of the passengers.

The newly wedded man, who was in the vehicle with his new wife identified as Adewale gave up while the rescue team of the Federal Road Safety Corps (FRSC) were trying to rescue the victims while the wife was said to be badly injured.

A family source disclosed that the couple were at Ikoyi Registry on Saturday and were travelling to Akure for the traditional wedding scheduled for this weekend, Saturday.

Other victims of the accident including a five-year child rescued by the FRSC were rushed to the hospital for medical attention while the remains of the dead have been deposited at the morgue.

The incident caused traffic gridlock on the ever-busy Akure /Ondo road for many hours as the men of the FRSC tried to rescue the victims and tow out the vehicle.

The spokesman of the FRSC in the state, Mr Abiola Fadumo, confirmed the accident but the command could not confirm the number of casualties saying rescue operation was still going on.