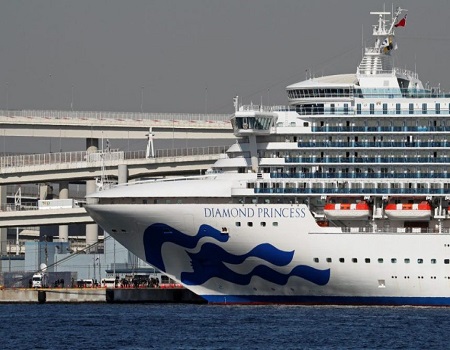 Prime Minister Scott Morrison on Monday said Australia would evacuate more than 200 of its citizens on-board a coronavirus-stricken cruise ship being held under quarantine in the Japanese port of Yokohama.

Morrison said the passengers would depart on Wednesday and will be taken to Australia’s tropical north, where they will be required to be quarantined for another 14 days.

The Diamond Princess Cruise ship, owned by Carnival Corp, has been quarantined since arriving in Yokohama on Feb. 3, after a man who disembarked in Hong Kong, before it travelled to Japan, was diagnosed with the virus.

More than 350 passengers on-board the Diamond Princess have tested positive for coronavirus, including 24 Australians.

Morrison told reporters in Melbourne that “for those more than 200 Australians, who will be returning to Australia, we are going to have to require a further 14-day quarantine period to be put in place on their return to Darwin’’.

He also said space on the Qantas Airways plane will be provided for an unspecified number of New Zealand citizens on the cruise ship.

He added that those passengers would be transferred to New Zealand when they arrive in Darwin.

Despite passengers’ spending two weeks confined to their cabins, some of which were windowless, Australian health officials said a further quarantine period was necessary.

Brendan Murphy, Australia’s Chief Medical Officer said “given there have been recent cases, we cannot be absolutely sure that any of the currently well people on the ship, who are coming home on Wednesday, are not carrying the virus’’.

On Sunday, the US evacuated about 400 citizens from the Diamond Princess, while Canada, Italy, South Korea and Hong Kong have also announced plans to repatriate passengers.