by Femi Osinusi
in Latest News
Reading Time: 3 mins read
A A

The people of Osun who are still in celebratory mood following the recent inauguration of Senator Ademola Adeleke as their governor trooped out en masse to receive the PDP presidential candidate, Atiku Abubakar, his running mate, Governor Ifeanyi Okowa and other party leaders.

Atiku, while addressing party members during a town hall meeting ahead of the campaign rally, said his government, if elected, would address security, revive the economy, unite the nation and improve the education system.

He noted that since the All Progressives Congress (APC) came to power in 2015, Nigerians have been suffering from bad governance, adding that the PDP is contesting the election to restore Nigeria. 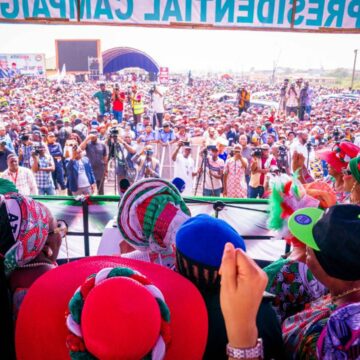 Atiku said: “If we are voted into office, we will stabilise Nigeria, unite its people, ensure security of lives and property and make sure our people benefit from the good governance of the PDP.”

At the rally, Atiku said: “My brothers and sisters of Osun State, I have come to say thank you and I appeal to you, I plead with you to come out in greater numbers than you did in the last state election and vote for the PDP in the next general election.

“That is the only way that you can secure your future and the future of your children, we promise you we will not fail you. We are not like APC because we have done it before, we have got the experience. We have got the people who have the capacity to bring about changes. We are not new as far as governance is concerned in Nigeria.”

“All of these are going to stop but it has to start with you people. If you give Atiku your votes come February 25, that is when it will be possible for Atiku to make you great.
,
“I implore you, don’t sell your conscience. Don’t sell your vote. I know there is hunger in the land and it is APC that brought all these predicaments to us but if Atiku is voted for, Atiku is going to change the state of this country not just Osun alone.

“The youths are the most unemployed in Nigeria and Atiku has promised women and youths 60 per cent in his cabinet and he is going to fulfill it. Atiku is a man of his words, he matches his words with action.”

Also at the rally, Osun State governor, Ademola Adeleke, said: “If Atiku Abubakar becomes the president of Nigeria in 2023, Nigeria is sure to develop and prosper.

“Atiku will restore the economy, security, agriculture, education and health; he will ensure that the nation is united. Atiku is an experienced man and the only candidate that can rescue Nigeria from its various problems and challenges.

“Under Atiku as Vice-President, Nigeria had the largest economy in Africa.  Atiku will direct Nigeria to the path of development. He will restore the rule of law and due process. Atiku will secure the nation.”

Urging the people of Osun to vote en masse for PDP in the February 25 presidential election, PDP’s Vice-Presidential candidate said, “I urge the people to vote for Atiku Abubakar as he is the only person that can rescue Nigeria from its economic woes.”

On his part, the national chairman of the PDP, Senator Iyorchia Ayu, urged the Osun people to vote for all PDP candidates during the 2023 polls.

Also speaking, the chairman of the PDP Presidential Campaign Council and Governor of Akwa Ibom State, Udom Emmanuel, noted that Atiku is the best man for the job because of his knowledge and experience in governance.