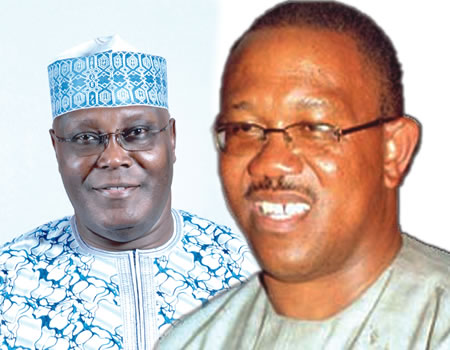 The presidential candidate of the Peoples Democratic Party (PDP), Atiku Abubakar and his running mate, Peter Obi, have met with the Gen. Abdusalami Abubakar-led National Peace Committee following the PDP flag bearer’s rejection of the outcome of Saturday’s presidential election.

The meeting which held behind closed doors in Abuja on Thursday also had in attendance Senate President Bukola Saraki; PDP National Chairman, Prince Uche Secondus; Speaker of the House of Representatives, Yakubu Dogara among other party leaders.

On the side of the Peace Committee were the Catholic Bishop of Sokoto Diocese, Matthew Kukah; Cardinal John Onaiyekan, and Rev. Fr Atta Barkindo of the National Peace Committee Secretariat.

The meeting came against the backdrop of Atiku’s decision to challenge the result as declared by the Independent National Electoral Commission (INEC) which gave President Muhammadu Buhari of the All Progressive Congress (APC) victory.

Speaking shortly after the meeting, the former Head of State said the aim of the committee is to douse the rising tension in the aftermath of the presidential election.

I will dialogue with IPOB, other agitators ― Peter Obi