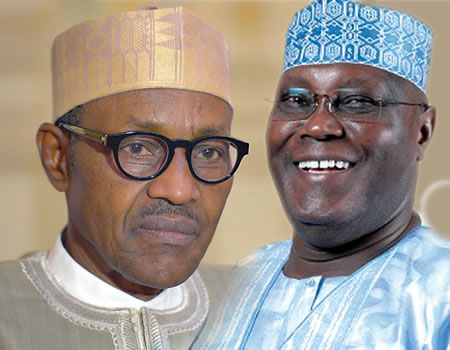 Share
The Peoples Democratic Party (PDP) presidential candidate, Atiku Abubakar, on Thursday failed to provide proof of evidence before an Abuja High Court, that President Muhammadu Buhari and members of his family own substantial shares in 9mobile and Keystone Bank.
This is just as the trial Judge, Justice Binta Mohammed adjourned till March 7, 2019, for hearing in the suit filed by the Buhari Campaign Organisation (BCO) against Atiku for defaming President Buhari and his family.
Before the case was adjourned, counsel to BCO, Barr Abdulrazaq Ahmed, told the court that the defendants’ lawyer served him in court with statement of defence, counterclaim seeking N200 billion and motion to strike out BCO from the suit on the ground that the president’s support group is not a juristic person as it is not registered with the CAC.
Ahmed said, “In line with Order 18, Rules 1 & 2 of the High Court, BCO is entitled to seven days within which to reply the defendants’ counterclaims”.
Following the refusal of the defendants’ lawyer, Ms Deborah Iniye Warrie, to oppose plaintiffs’ counsel, Justice Nyako adjourned the matter for hearing.
But neither documentary evidence nor proof of evidence was attached in the statement of defence filed by Atiku’s lawyers to substantiate claims that President Buhari and his family acquired substantial shares in 9mobile and Keystone Bank with total assets of $1.916 billion (equivalent to N307.5 billion) as well as purchasing about N3 billion worth of shares in the new Pakistani Islamic Bank.
Atiku in his 18-paragraph statement of defence only complained of the suit not properly constituted, insisting that what he said was in no way defamatory against Buhari since it was a matter of public interest.

Counsel to the PDP presidential candidate said, “The defendants (Atiku and Phrank Shaibu) aver that the defamatory statements are impartial observations, opinions and criticism on a matter of public interest.
The Buhari Campaign Organisation (BCO) had on January 22, 2019, sued Atiku, accusing him of defaming President Buhari and his family.
The plaintiff wants the court to order Atiku and his party to pay N40 million damages for alleged libellous claims that Buhari and members of his family own substantial shares in 9mobile and Keystone Bank.
Atiku had, in a statement issued in Abuja in January this year by his Special Assistant on Public Communication, Phrank Shaibu, claimed the first family had acquired shares in Keystone Bank with total assets of $1.916 billion (equivalent to N307.5 billion) as well as purchasing about ₦3 billion worth of shares in the new Pakistani Islamic Bank.
In the suit, the plaintiff is also seeking a declaration that, “the 1st defendant (Phrank Shaibu) on behalf and for the 2nd defendant (Atiku)  neglectfully, unlawfully and recklessly permitted and caused to be published in newspapers, defamatory and damaging statements against the 1st Plaintiff (President Buhari)”.
Atiku fails to prove Buharifamily’s involvement in 9mobileKeystone-Bank
Share

New LAUTECH VC reels out plans for institution at inauguration

Buhari sure of victory come Saturday, Emerhor, others declare