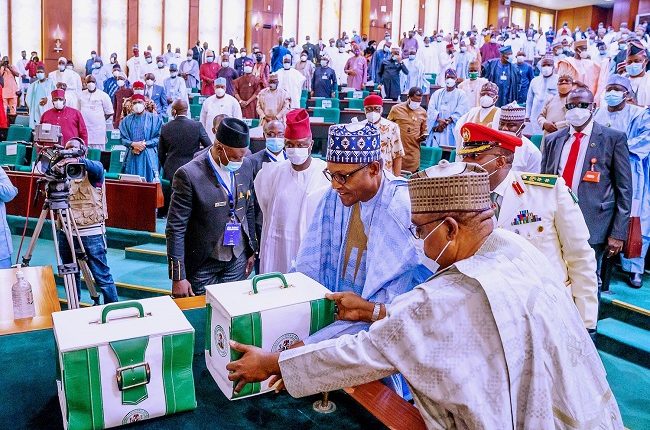 PRESIDENT Muhammadu Buhari on Thursday disclosed that the government used borrowing to stimulate the economy as response to the two recent recessions the country experienced.

The president disclosed this in his budget presentation speech, adding that the government had to use borrowing to ‘spend its way out of the two recent recessions.’ While formally laying the N16.39 trillion budget expenditure for 2022 fiscal year, tagged: ‘Budget of Economic Growth and Sustainability’ before the joint session of the National Assembly, President Buhari claimed that the nation’s debt profile was nothing to worry about, adding that it was within a sustainable limit.

He further argued that the loans, both local and external, were being tied to verifiable projects aimed at stimulating economic growth and development.

“Some have expressed concern over our resort to borrowing to finance our fiscal gaps. They are right to be concerned. However, we believe that the debt level of the Federal Government is still within sustainable limits. Borrowings are to specific strategic projects and can be verified publicly,” he said.

The president averred that the country would not have exited the two recessions fast enough without resorting to borrowing.

According to him, the total federally distributable revenue was estimated at N12.72 trillion while total revenue available to fund the 2022 federal budget is estimated at N10.13 trillion. This includes Grants and Aid of N63.38 billion, as well as the revenues of 63 government-owned enterprises.

President Buhari assured that the administration would prioritise defence and internal security, and would also ensure gallant men and women in the armed forces, police and paramilitary units are properly equipped, remunerated and well-motivated.

On the 2022 fiscal balance, Federal Government projected N6.26 trillion, representing 3.39 per cent of estimated GDP, slightly above the three per cent threshold set by the Fiscal Responsibility Act 2007.

According to him, Federal Government planned to “finance the deficit mainly by new borrowings totalling N5.01 trillion, N90.73 billion from privatisation proceeds and N1.16 trillion drawdowns on loans secured for specific development projects.”

The president also unveiled the administration’s plan to review the policy effectiveness of tax waivers and concessions, boost customs revenue through the e-Customs and single window initiatives and safeguard revenues from the oil and gas sector.

While acknowledging that Nigeria has witnessed two recessions within the period of the administration and the country spending its way out of recession by borrowings, he assured that the loans would be used to finance critical development projects and programmes aimed at improving economic environment and ensuring effective delivery of public services to the people.

He listed critical projects to include completion of major road and rail projects; effective implementation of power sector projects; provision of potable water; construction of irrigation infrastructure and dams across the country and critical health projects such as the strengthening of national emergency medical services and ambulance system, procurement of vaccines, polio eradication and upgrading primary health care centres across the six geopolitical zones.

He also expressed Federal Government’s medium-term plan to grow revenue-to-GDP ratio from about eight per cent currently to 15 per cent by 2025, adding that at that level of revenues, the debt-service-to-revenue ratio will cease to be worrying.

He said capital projects that are candidates for PPP by their nature would be developed for private sector participation, while the government would also explore available opportunities in the existing ecosystem of green finance, including the implementation of Sovereign Green Bond Programme and leveraging debt-for-climate swap mechanisms.

President Buhari assured that revenue mobilisation improvement would be sustained in 2022 with the goal of achieving tax enhancement and excise revenues through policy reforms and tax administration measures; review the policy effectiveness of tax waivers and concessions; boost customs revenue through the e-Customs and single window initiatives and safeguard revenues from the oil and gas sector.

While commending the National Assembly for the passage of the Petroleum Industry Act 2021, he expressed optimism that the implementation of the law will boost confidence in the economy and attract substantial investments in the sector.

Buhari expressed optimism that the recent passage of the Petroleum Industry Act 2021, and consequent incorporation of the Nigeria National Petroleum Corporation (NNPC) should also result in the rationalisation of expenditure, as well as increased investments and improved output in the oil and gas industry.

On the planned deregulation of the downstream sector of the oil industry, he observed that the Petroleum Products Pricing Regulatory Agency (PPPRA) had in March 2020 announced that the price of petrol would henceforth be determined by market forces, the plans were stalled as a result of the rising crude oil prices and exchange rate to push the price above the hitherto regulated price of N145 per litre, as well as opposition against the policy of price deregulation hardened on the part of Labour Unions in particular.

He announced plans to review the current tax and fiscal laws, adding that in line with the administration’s plan, a draft Finance Bill, 2022 had been attached with the 2022 budget estimates, partly to support the realisation of fiscal projections.

Based on the 2021 fiscal framework, total revenue of N8.12 trillion was projected to fund aggregate federal expenditure of N14.57 trillion (inclusive of the supplementary budget). The projected fiscal deficit of N6.45 trillion, or 4.52 per cent of GDP, is expected to be financed mainly by domestic and external borrowings.

The president said despite the revenue challenges, the country has consistently met debt service commitments, payment of staff salaries, statutory transfers and overhead costs. “As of 4th of October 2021, a total of N1.732 trillion had been released for capital expenditure,” he said, adding that the MDAs’ capital budget would be fully released by the end of the fiscal year 2021.

While noting that Lagos-Ibadan rail line has been completed and operational, the president observed that the Abuja-Kaduna line is running efficiently while the Itakpe-Ajaokuta rail line is finally completed and commissioned.

He added that arrangements are underway to complete the Ibadan-Kano rail line, while work will soon commence on the Port Harcourt-Maiduguri rail line and Calabar-Lagos coastal line, which will connect the southern and eastern states and to the North.

On power generation, President Buhari said progress was being made on several power generation, transmission and distribution projects, as well as off-grid solutions, all aimed towards achieving the national goal of optimising power supply by 2025.

On road projects, the president said Lagos-Ibadan expressway, Apapa-Oworonsoki expressway, Abuja-Kano expressway, East-West Road and the Second Niger Bridge would be commissioned before the end of his tenure in 2023.

Senators who spoke after President Buhari’s presentation equally allayed the fears of Nigerians. Senator representing Lagos West and chairman, Senate Committee on Finance, Olamilekan Adeola, said he was not bothered about the rising debt profile.

“Mr President has given assurance that the deficit will be financed by borrowing. He has said we have nothing to fear, the borrowed funds are tied to specific verifiable projects. We are convinced it will take care of our needs,” he said. Senator representing Ekiti Central, Michael Opeyemi Bamidele, also justified the borrowing and expressed the hope that both the parliament and ordinary Nigerians would be vigilant to ensure that borrowed funds were judiciously utilised. Senator Uba Sani, chairman, Senate Committee on Banking and Finance, equally expressed confidence that the target of President Buhari was to develop critical social infrastructures. In his opening remarks, President of the Senate, Ah- mad Lawan, said the continuous external borrowing was cause for concern and advised the Federal Government to seek other sources of funding the budget.

He said: “Mr President, the need to enhance revenue generation and collection cannot be overemphasised. The level of budget deficit is high, and both the Legislature and the Executive should work to reduce this deficit through the availability of more revenues.

“I must commend the Senate and House Committees on Finance and the Ministry of Finance, Budget and National Planning for working together to improve the level of revenues for the government.

“Mr President, we understand that due to paucity of revenue, the Federal Government has to resort to raising funds from foreign and domestic sources to provide infrastructure across the country. That is why the National Assembly approved the requests for borrowing.

“The Commitment of the Federal Government in providing infrastructure across the country means that the funds must be raised one way or the other. Government should also explore other sources of funding its projects in order to reduce borrowing.”