Weekend Lagos
By Subair Mohammed and Dayo Ayeyemi On Aug 27, 2022 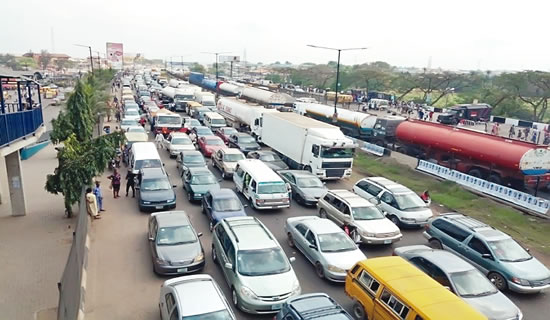 THE attacks on motorists by traffic robbers on the Kara Long Bridge on the Lagos-Ibadan Expressway penultimate week have led to calls by residents and road users for the speedy completion of the ongoing construction works on Kara and Otedola bridges.

The Kara Bridge-Berger axis of the Lagos-Ibadan Expressway, according to a victim of traffic robbery, Gbenga Owotimo, is a hot spot for all kinds of evils perpetrated by the men of the underworld.

He attributed the recurring traffic snarl to the ongoing construction works on the bridges which, he reasoned, was what the robbers and hoodlums were taking advantage to rob motorists.

He appealed to the governments of Lagos and Ogun states to rid the Kara market, especially the under-bridge of criminals and criminal activities threatening the peace of residents and motorists in the neighbourhood.

Troubled by the spike in the cases of traffic robbery and alleged kidnappings in the axis, from the Lagos end of the Long Bridge, the commander of the Rapid Response Squad, Yinka Egbeyemi, on Tuesday, deployed officers in both inward and outward Ogun State Long Bridge as part of follow-up routine patrol of the area.

The patrol, according to him, is aimed at complementing the efforts of other police units to strengthen security on the bridge and around the area.

To stem the tide of incessant robbery attacks on the Long Bridge and its environs and assist the police and vigilance groups in their operations, the chairman of the Community Development Association, New Generation Estate, Oke-Ayo, Ogun State, Mr Kunle Awosuyan, said residents in the estate pay a certain amount monthly to support the Ogun State police command and Western Nigeria Security Network, Amotekun, in their patrol and surveillance operations.

The monthly stipends, according to him, are made available through the Community Development Associations (CDAs) with the aim of supporting the two security agencies on the provision of security.

On the experiences of motorists and residents as they journey through the axis to and from their work daily, Awosuyan disclosed that some residents of the estate were recently attacked by robbers that were believed to be from the northern part of the country.

The torment motorists and residents are subjected to daily by hoodlums during traffic congestion, he lamented, is better imagined than experienced.

He said: “Residents ply the Kara Long Bridge route with their hearts in their mouths. Recently, a resident of the estate, Mr Joseph Fasoye, fell victim to a robbery attack.

“He was violently attacked and had his vehicle’s windscreen shattered by the robbers. The frequency at which these attacks occur is alarming and it calls for urgent actions. And this is due to various demarcations on the road by the construction giant, Julius Berger, which caused heavy traffic on the Long Bridge inward Lagos.

“Aside from this, the road is narrowed at FATGBEMS Bus Stop and Otedola Bus Stop. It was discovered a long time ago that hoodlums hide under the bridge from where they launch an attack on motorists when the traffic has built up early in the morning and late in the night.

“We have held several meetings with the adjoining communities and the police division at Warewa to halt the ugly trend but our efforts have yielded little result. The communities along the axis are in partnership with the police to curb the situation.

“Each community, through the CDAs, was asked to make a monthly contribution to support the police and Amotekun to provide security. At present, men of Operation Mesa and Quick Rapid Response are stationed there early in the morning and late in the night.

“I am appealing to the government to address the worsening security situation in the state and compel the contractors working on the reconstruction to speed up the work. They must also urge the construction company, Julius Berger, to be more efficient and fortify security on the expressway,”

A resident, Mr Akinpelu Akano, spoke of the efforts that have been made so far by residents to secure their community. Akano said the CDA had to contract members of the Oodua Peoples Congress (OPC) to provide security in the community.

He said: “What readily comes to my mind when plying the road is fear. There was a time Community Development Associations contributed funds for members of the OPC to secure the Kara Long Bridge. The CDAs had also done a lot in the past to secure the services of the Nigeria Police.

“An okada rider told a member of my church about how he was robbed during the last incident. The bike man told the woman that two mechanic guys on the motorcycle were lying down like others on the day and they armed themselves with tools. They disarmed two robbers before the arrival of policemen while the other robbers fled.”

Another road user, Ezekiel Alade, said: “It is a dangerous area. They appear suddenly from under the bridge wielding cutlasses and iron rods. They speak Yoruba language. The under-bridge is their hideout. From there, they launch violent attacks on motorists.

“Some people say they are herders but I want to believe that they are miscreants that prey on unsuspecting motorists. The governments of Ogun and Lagos states need to synergise and provide streetlights along the bridge because if the bridge is lit up, one can easily see anyone approaching.

“I give it to officials of So Safe Corps. They patrol the long bridge on motorcycles offering help to stranded motorists. They monitor activities on the long bridge. I remember when I had a flat tire on the bridge. They approached us and stood by us until we were able to fix the tire.”

Reacting to the recurring attacks on motorists, a meat seller in the Kara Market, Bolaji Omoaje, told Saturday Tribune that thieves that operate in the market take over the bridge at night to rob motorists and passers-by of their belongings and then flee back into the market.

Omoaje, an Oyo State indigene, called for a synergy between Lagos and Ogun states to curb threats to lives and property.

One of the victims who identified himself simply as Folusho explained how he escaped a robbery attack last Monday when some youths armed with machetes barricaded a section of the road inward Lagos around 5.30 in the morning. He claimed that they ransacked vehicles on the Long Bridge and dispossessed motorists of their valuables.

According to him, the operation lasted for about 25 minutes as there was neither resistance from the motorists and nor was there any police patrol. He said the robbers made away with mobile phones and cash stolen from motorists.

Speaking on the safety of motorists and residents on the axis, the Area Commander of the Ogun state government-owned security outfit, So Safe Corps, Rotimi Ige, said members of the corps were on 24 hours patrol of the seven-kilometer bridge on a mission to curb the activities of men of the underworld and hoodlums operating on the highway.

The security outfit, Ige declared, was troubled with the development and assured residents, traders and motorists of the commitment of the corps to ensuring maximum protection of lives and property.

He said: “The incessant robbery attacks on motorists on the Kara Long Bridge are a cause for concern. To curb the ugly trend and ensure safety of motorists and residents, Ige disclosed, ten officers of the corps maintain a 24hrs surveillance of the 7km Kara Long Bridge week in, week out despite their challenges.

He said: “Motorists are not the only target along the axis, traders and residents are vulnerable, too. But our state commander is in charge of everything. We are doing all we can to protect lives and property of residents and motorists on that axis.

We have stationed 10 of our men for 24 hours on that seven-kilometer long bridge but our challenge has been lack of assistance from the government. We are trying our best to ensure safety of lives and property in that axis.

“Nobody is assisting So Safe Corps on logistics. We are trying within the limited resources available to us. We are not placed on any salary. Many people are supporting us because they know our competence and feel our impacts. They recognise us as the last resort.

The police are there but since we have a dynamic So Safe, we have been trying our best. There is no motivation, no salary but we are doing our best. And this is because the So Safe Corps has a courageous and determined state commander that is committed to safer and crime-free Ogun State for motorists, residents and visitors.”

Corroborating the stance of the Area Commander, Director of Information and Public Relations, So Safe Corps, Maruf Yusuf, assured residents in the troubled environment of the agency’s commitment to securing the axis.

He said: “We are not for a particular local government area or community. We are for the entire state. And that aspect you have just spoken about, we have instructed our boys to redouble their efforts so that residents in that axis will continue to live in peace.

“We are not relenting in our efforts as the people in the community are very supportive. We want to assure them that we are not going to rest on our oars in providing a safe and secure environment for them to live in.

Insecurity: 5,000 Nigerian children may die of starvation by October —UN

My Journey into music has just begun —Carterefe