At installation, Baale Araromi appeals to Govt to develop community 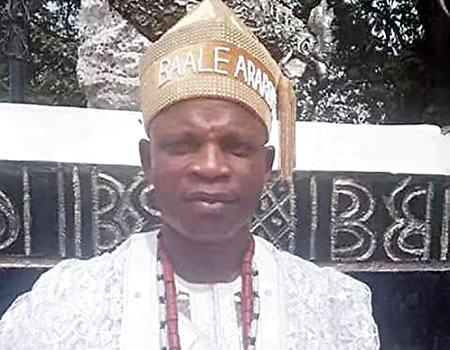 The newly installed Baale of Araromi Oke Odo community in Ile Ife, Osun state, Chief Wahab Olanrewaju Lawal, has appealed to the state government to provide his community with basic infrastructure in order to enhance the standard of living of people in his community.

Baale Lawal in his appeal stated that the joy of any leader is for his people to live in comfort so that there will be no mass migration of people, especially youths, from the community, adding that if enough infrastructure is provided, it would enhance the standard of living of residents and the overall development of the state.

The traditional ruler, who made the call shortly after his installation as the Baale of Araromi Oke Odo, a purely agrarian community, expressed his commitment to ensuring that the community gets a facelift during his reign, reiterating that his peoples’ welfare is his priority.

He said the provision of infrastructure is paramount to the development of every society, empasising the need for the state government to provide electricity, roads, health centre, schools and other amenities to the community.

He emphasised that the community has over the years not enjoyed any major patronage from government, adding that this has hindered economic growth and affected the socio-economic life of the community.

“We have not enjoyed any social amenity in this community over the years; we urge the government of Osun State, as a matter of urgency, to come to our aid and help to develop this community by providing us with basic amenities, especially electricity which we don’t have. In this community, we do not have electricity or potable water, among other basic needs.

“We know the government is presently reaching out to other communities around here and we appeal that we are also remembered in this good gesture. If these basic needs are provided, it will go a long way in bringing in development here by boosting agricultural activities, thereby improving our standard of living,” the new baale said.

Untold details of how Bayelsa poll was rigged —Diri

The Olowa of Adimula Ife, Oba Adeyeye Adekola, who performed the installation alongside other traditional rulers advised Chief Lawal to carry his people along in running the affairs of the community and also exhibit he virtue of humility.

Chief Lawal in his response, expressed great appreciation to the Ooni of Ife, Oba Adeyeye Ogunwusi, for counting him worthy of the honour to lead his people and promised not to let him down. He further sought the support of his people, telling them they are key to the successful running of the affairs of the community, adding that without their support, there is little that can be achieved.