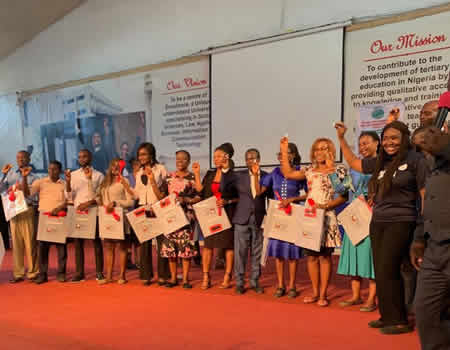 The fifth annual international conference on Raising Girls Ambition (RAGA), organised by the Global Youth Leadership and Girl-Child Foundation (GYLGF), has highlighted the need to educate and empower the girlchild with digital age skills so that they can not only survive but thrive in the ever-progressing information and technologically advanced age. Themed “Debunking Stereotypes: Empowering Women and Girls for the Digital World for Sustainable Development,” the conference held at Lead City University, Ibadan from Tuesday, October 8 to Friday the 11th.

Discussants at the conference profoundly explained how digitisation offers vast potential for women and girls: from ending poverty to improving education and health, to agricultural productivity, and creating decent jobs.

When Nigerian Tribune spoke with Mrs Adepeju Aderogba-Oti, the conference convener and the founder of The Global Youth Leadership and Girl-Child Foundation (GYLGF), she mentioned that parents should endeavour to expose their children to programmes of this nature in order to sensitize them on to topical issues like the conference theme and also impart knowledge.

She also spoke extensively about the need for a more responsive and supportive government that would grant young girls the opportunity to be significant inclusive members of this digital world.

She specifically emphasized the need for the government to walk the talk by providing all the necessary support to organisations such as GYLGF that promote the cause of the girlchild.

Mr Duncan, speaking on the theme of the conference, opined that only performing traditional roles in the 21st century as a woman was outdated and women should be given the opportunity to broaden their horizon educationally.

He cited a practical example on how an educated woman would bring in more income to the household and also how a highly accomplished woman in her field of work will bring not only an honour but also prestige to her family at large.

After having a one and one conversation with some of the young girls that attended the conference, Nigerian Tribune observed that most of them had previously attended past RAGA conferences and were excited to have been given an opportunity to be present at another edition.

A student, Inioluwa Ijaoye from Lead City High School commented on the fact that young girls ought to always have it at the back of their minds that no individual should place the sky as their limit. She also added that young girls of this age need to strive to look beyond the mediocrity of old traditional beliefs that might hinder juvenile girls from reaching their maximum potential.

GYLGF is a non-profit organisation that is aimed at producing girls that are well rounded in every sphere. It was founded by Mrs Adepeju Aderogba-Oti. The first RAGA conference held in 2015 at the University of Ibadan.