Features
By Yejide Gbenga-Ogundare On Jun 21, 2022 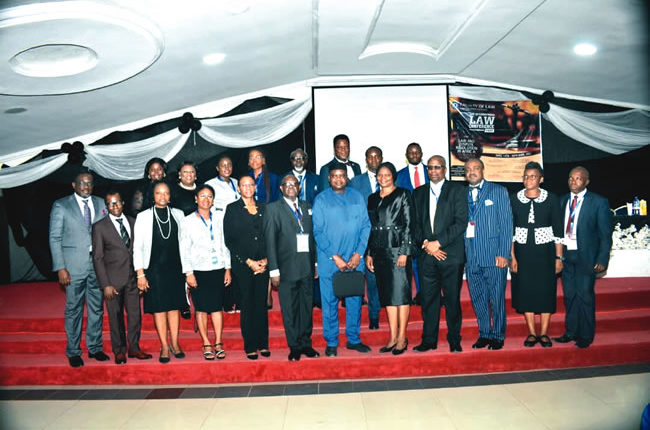 IT was a period of knowledge sharing and legal deliberation at the maiden edition of the International Law Conference on Law and Dispute Resolution of the Lead City University, Ibadan as part of efforts to complement the various activities going on around the world to look for stress free solutions to the myriad challenges besieging the human society in terms of conflict resolution.

It was a gathering of accomplished legal minds including Justice Mojeed Adekunle Owoade of the Court of Appeal, the Chief Judge of Oyo State, Justice Munta Abimbola,  Justice Alero Akeredolu, Mrs Miannaya Essien (SAN), Prof Adebambo Adewopo (SAN), Prof Bankole Sodipo (SAN) as well as other distinguished minds in the legal and academic world led by the  Pro-Chancellor and Chairman of the Governing Counciul of Lead City University, Prof. Jide Owoeye and the institution’s Vice Chancellor, Prof Kabiru Adeyemo.

While speaking, the duo of Prof. Jide Owoeye and Prof Kabiru Adeyemo stated that conflicts take different forms in the human society and the African setting has its peculiarity which had embraced Alternative Dispute Resolution (ADR) methods as it has been part of customary system of conflict resolution in Africa since time immemorial, adding that dispute resolution is grounded in the African society though there is need to improve on what exists to fit in with modern realities.

In her welcome address, the Acting Dean of the Faculty of Law at Lead City University, Foluke Oluyemisi Abimbola said the conference is of utmost importance as it is coming at “a very auspicious time as the world is looking for solutions to a myriad of problems and challenges. It is clear that a one-tracked manner of resolving disputes can no longer be sufficient to deal with the number of diverse problems confronting us as individuals and communities especially in this 21st century.”

She added that just as dynamism in teaching methods, research and practice of law is imperative, so also are alternatives to resolving disputes must be sought and established.

In his opening remarks, the chairman of the conference, a Presiding Justice of the Court of Appeal Kaduna Division, Hon. Justice Professor M. A. Owoade, stated that the conference on the Conference on “Law and Dispute Resolution in Africa:  Problems and Prospects,” marks another historic event as the juridical space on the possibilities and utility of Alternative Dispute Resolution, the concepts of ADR taken together have witnessed a phenomenal growth in jurisdictions the world over.

“While Arbitration for example has achieved wide recognition and is underpinned by established legal frameworks, other ADRs are still largely ‘struggling’ for the same acceptance and adoption into the mainstream of dispute resolution. We do not have to get into the question of whether it is Arbitration and ADR or Arbitration as ADR before we appreciate the words of Professor Gaius Ezejiofor that resort to arbitration and other ADR processes as well.

He stated that ADR will among other things shield the parties from the frustrating delays which have bedevilled the judicial processes particularly in recent times when the growth of litigation seems to have completely overwhelmed the judiciary and reduced it to a position of helplessness as well as the comparatively heavier financial outlay which such processes entail.

“It will shield them from the disclosure of business secrets to competitors, which sometimes occurs in litigation which are always in public, the adverse publicity which some litigants attract to the litigating firms and the rigid formality which characterises court trials,” he added.

He however urged that “the conference should not end up as one of those conferences that make no impact, rather just as Sanders contributions at a conference just like this changed the face of dispute resolution globally, we must ensure that the prospects identified here are widely disseminated to policy makers and key stakeholders for implementation.”

On his part, Prof. Bankole Sodipo, (SAN), stated that despite best endeavours, schisms leading to disputes will continue to rise among the peoples of the world as disputes have been a common bane of man from pre-colonial traditional African societies, to modern Africa.

According to him, “Africa is home to dispute resolution mechanisms often run by African chiefs, kings and elders, now commonly christened customary arbitration. History is also replete with dispute resolution in traditional African societies through wars. It is amazing that despite the best endeavours by multilateral and regional bodies, some recent disputes have been or are being resolved, albeit, through wars.

We can’t win fight against sexual, gender based abuses without adequate data — Oyo…