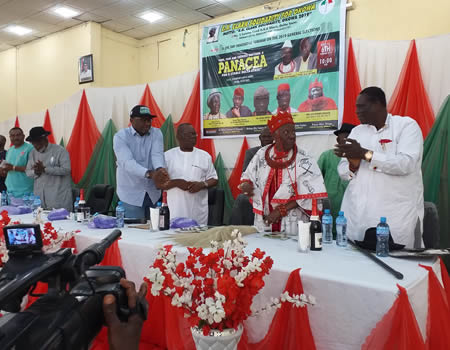 Ahead of the general elections, stakeholders in Delta State, on Wednesday, called on the Independent National Electoral Commission (INEC) to conduct a free, fair and credible voting exercise.

The call was made at EK Clark Solidarity for Okowa one-day seminar tagged: “Free Fair and Credible Election: A Panacea for a Stable Delta,” held at the Government House Annexe in Warri.

Keynote Speaker at the event, Professor Godinni Darah, during his presentation, warned INEC never to compromise the integrity of the electoral umpire by being biased during the polls.

He conjectured that the refusal of President Muhammadu Buhari to sign into law the amended Electoral Bill and that of the Petroleum Industry Bill (PIB) are ominous signs that the election might not be free and fair.

He, therefore, urged INEC to take a firm stance to ensure a free fair election and be fair to all political parties participating in the polls.

The Professor of English and Literary Studies, who urged Deltans to vote massively for Senator Ifeanyi Okowa for his second term for the sake fairness and equity, also called on the media to eschew fake news as regards the elections.

Describing fake news as “media weapons of mass destruction,” in spite of the invaluable functionality of the new media, Prof Darah urged institutions and individuals to positively, but vigilantly and discreetly, harness multimedia platforms to influence the electoral process.

He urged Deltans across all tribes and tongues to vote Senator Okowa as governor and all other PDP’s candidates as well as defend their votes during the voting exercises.

Chairman of the occasion, Prof Sam Oyovbaire and the national coordinator of EK Clark Solidarity for Okowa, Sir Simeon Efenudu, reiterated that since Delta Central and Delta South had had their eight years each as governors, it was the turn of Delta North, as represented by Okowa, to have its fill of eight years nonstop.

“We must support him (Okowa) because not doing so will be injustice and negation of equity principle that allows all sections to taste the highest office of the state.

“This is the only way to build a better, stronger, Delta State as we cannot afford disunity with ethnic tribal sentiments,” Prince Akpo Abugo, the facilitator and publicity secretary of the forum averred.

Present at the gathering were chairman of the forum, Bishop Samson Amajene and his state executive members, representatives of EK Clark who was the father of the day and Governor Okowa, the special guest of honour.

Others were the centenarian monarch, HRM Ovie Richard Layaiguen, the Ogoni-Oghoro 1, political leaders from the three senatorial districts, youths and women politicians who flooded the venue in their numbers.