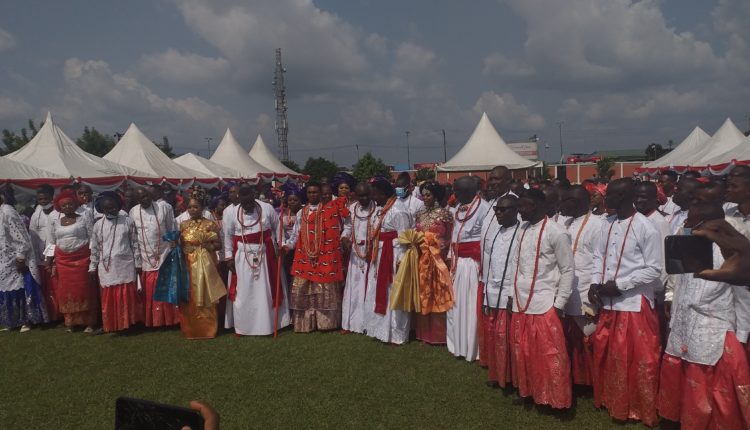 The Olu of Warri, His Majesty, Ogiame Ikenwoli, has frowned at settling communal disputes by bloodshed, saying: “No human needs, wants, demands or ambition is worth the blood of any of our people.”

It will be recalled that Ogbe-Ijoh people have, recently in protests, accused the Itsekiris of hijacking an electoral ward created for them by the Delta State Independent Electoral Commission (DSIEC) which Chairman, Warri South, Michael Tidi, PhD, has since described as untrue.

The first class monarch, who described his 5th coronation anniversary as a significant milestone, called for a peaceful coexistence beteeen Itsekiri and their neighours in Delta State.

Ogiame made the remarks on Saturday at his Ajamimorha Palace on the occasion of the nineth day of his 5th Coronation Anniversary celebration held under strict COVID-19 protocols.

The day featured colourful traditional dances and paying of homages by chiefs, several Itsekiri groups, both home and abroad including the Ologbotsere Descendants led by the Ologbotsere of Warri Kingdom, Chief Ayirimi Emami, at the palatial Olu’s palace.

Addressing the mammoth gathering through one of his chiefs, Brown Mene,

HM Ikenwoli reiterated his commitment to peace and cooperation with Itsekiri’s neighbours, urging for a peaceful resolution of grievances.

“Let me reiterate my avowed commitment to peace and cooperation with all pir neigbours as we continue to love together.

“We, however, must point out that whatever grievances they have should be pursued in a way that will continue to engender peaceful peaceful coexistence and discourage violence and bloodshed.

“No human needs, wants, demands or ambition is worth the blood of any of our people.

“We therefore stand ready and prepared to do all that we can to continue to promote peace and contribute to the security of lives and national assets in our kingdom within the three Warri local government areas,” the monarch enthused.

The Warri monarch expressed gratitude to God for preserving the lives of sons and daughters of the Itsekiri kingdom home and abroad since the outbreak of the COVID-19 pandemic.

He, however, urged all Itsekiri home and abroad to continue with all precautionary measures as advised by the Federal Ministry of Health in keeping the scourge at bay.