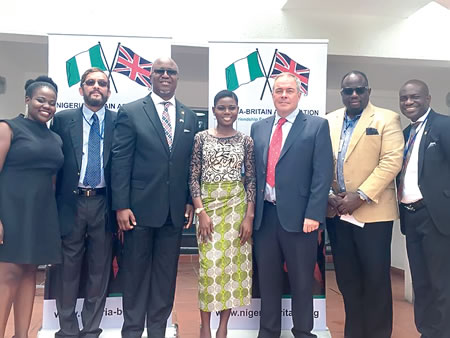 The setting was exquisite,  royale and  colourful. The event was this year’s annual Presidential Cocktails of the Nigeria-Britain Association (N-BA), held recently at the hallowed residence of the Britain Deputy High Commissioner, Laure Beaufils, located in Ikoyi, one of the highbrow areas of Lagos metropolis.

But, besides being an opportunity for eminent personalities from the two countries – Nigeria and Britain, to fraternize, another highlight of the event was the local fashion, which was on parade.

It was a celebration of local fashion, as epitomized by Miss Bukola Adeogun, who had just emerged  winner of the association’s fashion competition, held, prior to the event. The fashion competition was  meant to encourage budding talents in the nation’s fashion industry and showcase them to the world;  one of the reasons the association was set up in the first place.

By coming tops at the competition, therefore,  one of the benefits accruing to  the Lagos-based fashion talent was that opportunity to mingle with the ‘high and mighty’ that  thronged the  event and showcase  her wares to those guests, comprising Nigerians  and Britons.

Founded 49 years ago, the Nigeria-Britain Association (N-BA) was set up with the sole aim of fostering and deepening friendship between the two nations and enhance  socio-cultural ties; hence its decision to beam its focus on discovering  and celebrating local  fashion talents, at this year’s presidential luncheon.

“The reason for this is quite simple. It is only on top of friendship and deepening those ties that we can begin to build businesses, build diplomacy, leverage international politics and all those good things we like to see happen, from a platform of friendship,” he stated.

According to him, fashion remains one of the platforms the association uses to cement such  friendship, hence the decision to organise a fashion show this year. “This year we did a competition for the best designer and we got different people. It was narrowed down to about five, with Bukola Adeogun, the person we are honouring today, coming tops among the five at the grand finale,” he stated.

Tinubu explained that since fashion remains a major part of the people’s culture, the aim of the fashion competition was to discover and showcase local fashion talents to the world.

According to him, the fashion parade, exhibiting different local fashion styles, as designed by Miss Adeogun, who has her shop in Egbeda, the ever-bustling part of Alimosho Local Government Council Area of the metropolis,  was one of the steps the association had taken to deepen the two countries’ relations in the area of culture.

Besides, the association had also organised    a schools debate, involving private and public secondary schools across the country, where lots of talents were discovered. “The schools debate was an eye-opener. You will be amazed at the amount of talents,  intelligence and potential exhibited by the  competing students from both public and private schools. And even though the  competition was won by a private school, you could see a little bit of energy from the public schools, too,” he added.

Tinubu described the Annual Presidential Cocktails as one of the high profile events of the association, a gathering of who is who in the two societies and it is usually held at the residence of the Deputy British High Commissioner. “It’s a presidential luncheon, hosted by the Deputy British High Commissioner. I’m the 49th president that means we have been doing this for the past 49 years,” he stated.

But, the association is unrelenting, he says. For instance, it is throwing its doors open to members of the public, especially the youths, who will be value-adding to the cause of the association. “We need to re-invigorate the association. We believe besides encouraging budding talents  in the fields of fashion, education and others, we must ensure that the legacies built over the past 49 years must continue.

“That is why we are throwing our doors open to members of the public, especially the youths, within the ages of 18 and 30 to join to enable them log into that platform of friendship between the two nations,’ he stated.

Speaking at event, the  British Deputy High Commissioner, Laure Beaufils, stated that the association had become imperative in fostering the relationships the two countries had developed over the years.

“Talking about relationship between the two countries, you discover we have so much in common. We have language in common, we have heritage in common. We have strong relationships that cover trade and commerce, security and a wide range of issues. That we are coming together this night to celebrate local fashion talents is a testimony to such relationship,” the first female British Deputy High Commissioner in Nigeria stated.

Expressing her delight at the event, Miss Adeogun expressed the belief that the event would go a long way in giving her business the much-needed push.