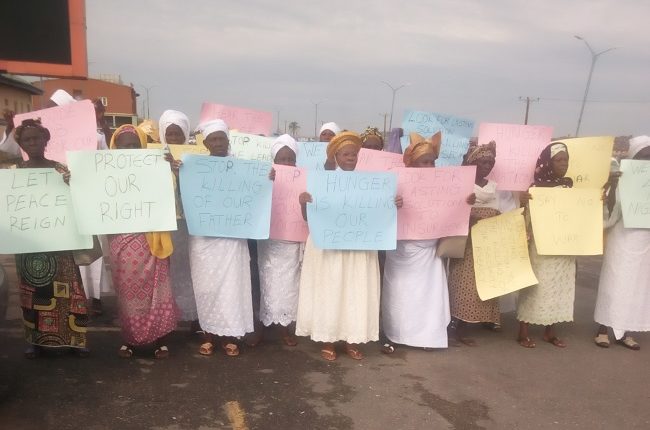 Hundreds of angry women at the weekend protested the spate of insecurity, kidnappings, poverty, and other nefarious activities that have enveloped the country.

The women were armed with placards with different inscriptions including “We are tired of insecurities in the country”, “We are worried that the government has been less concerned to the welfares of the people in the country”, “We are tired of hunger in the land”, “Why is the government so callous that they are deviants to the cries of innocent in the area of providing them with adequate security among others to express their grievances.

The protesters who were mainly widows, aged and unemployed women under the aegis of Association of Brave Women converged on the popular Nelson Mandela Freedom Park, Osogbo.

They frowned at the insecurity in the country and called on the appropriate authorities to address the situation before it gets out of hand.

At the end of the protest, many widows, less privileged women, and artisans were empowered.

Speaking with newsmen on the development, the President of the group, Evangelist Matilda Farinde, said the group took the step to alleviate people’s sufferings in the state.

The president who disclosed some of the items provided for the beneficiaries are money and other working tools that could assist them in their different fields of operations said they would also be given loans.

She further assured that the group would intensify more efforts to see that more people are taken care of to reduce the spate of hardships in the country.

Another group, Destiny Helpers also distributed application forms to the women present at the programme with the aim of giving them loans.

I have no rift with Wike ― Secondus