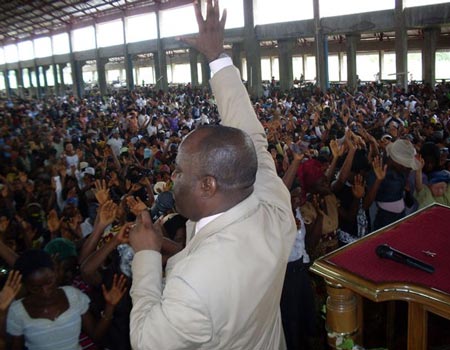 The crisis rocking Assemblies of God Church has taken another frightening dimension following dismissal of 162 Reverends and Pastors majority of whom are based in the northern part of the country while the church in the north has equally pulled out and formed Northern Assemblies of God General Council.

Ex-General Superintendent of Assemblies of God Nigeria, Reverend Paul Emeka along with one hundred and sixty two others were disclaimed and their names published last Friday and consequently dismissed while the  general public were warned not to have any dealing with them unbehalf of the church.

Apparently reacting to the dismissal and notice of disclaimer, one of the affected clergymen, Reverend Yakubu Pam who is the District Superintendent of Assemblies of God Church and Chairman Christian Association of Nigeria (CAN) Northern Nigeria condemned the notice of disclaimer adding that the action taken would further aggravate the crisis rocking the church.

“When we discovered that the crisis defied solution despite entreaties from various quarters, we in the north pulled out and formed Northern General Council of Assemblies of God. We cannot remain under injustice, northern Christians respect hierarchy, we don’t believe in pull-down syndrome.”

“It is wrong for an assistant to pull down his boss, it is ‘unAfrican’ and the bible condemn such. If we align ourselves with this arrangement or allow it to go unchallenged, it may serve as precedent which many of us in the north don’t want to happen. We are law abiding, it has never happened in the church history. I want to tell you that 3,000 pastors in the north have pulled out. It is wrong for anybody to tamper with church history.”

However, a senior clergy of the church who spoke with Tribune Online on condition of anonymity said the claim by Reverend Pam that 3,000 of pastors in the north had pulled out of the church was false adding there are many who still aligned themselves with Dr. Chidi Okoroafor.

According to him, the decision to pull out was not binding on all while there are many still contemplating where to align themselves with adding that situation in the north is still dicey