As VC, I set target for myself and how to achieve them — Onimawo 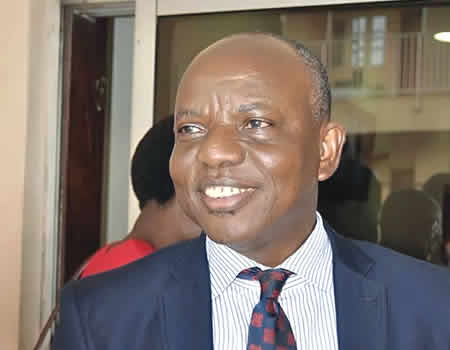 Professor Ignatius Oniwawo, vice-chancellor of Ambrose Alli University, Ekpoma, Edo State in this interview with HENDRIX OLIOMOGBE revealed what he did to eradicate cultism on the university campus among other achievements recorded by his administration. Excerpts:

HOW has it been in the last 36 years since your institution was founded by the late governor of the old Edo State, Prof. Ambrose Alli, after whom it was named?

The institution, no doubt, has experienced some tremendous progress for the 36 years that it has existed and a lot of progress have been made. We have had our challenges in the past, we had issues here with cultism with all kinds of evil practices but our joy is that over the last 12 years fortunately administrations have fought this evil to a standstill. As we speak now cultism and such practices are at the lowest ebb in Ambrose Alli University in fact none take place in this university anymore.

What have been your major achievements since you took over the reins of administration in May 2016 as the vice-chancellor?

I had already made up my mind what I want it to be, the kind of vice chancellor I wanted to be and what I wanted to achieve. So I had my vision, my mission statements and also the strategies to actualize them. The vision is that at the end of my five years, Ambrose Alli University will be clean, positioned as the best university in Nigeria and among the 10 best in Nigeria as a whole. I must tell you that the first objective has been achieved and the second objective I want to believe that before we leave office it will be achieved.

How have you been able to tackle the issue of late release of results?

Some years ago there was this belief that if you write your exams you may not get your result. Sometime they may tell you that your results are missing, some time they may say you must see a lecturer or a staff before your scores are released. At some other time they tell you that if you pay certain amount of money, your scores can be upgraded. All those things were happening. I must say that they were not happening only in AAU. Such things happen in other universities but part of my mission was to ensure that such practices will no longer exist in Ekpoma and I decided to use ICT to solve this problem that was why we used computer based exams.

How did you fare with the novel ICT based examination? What is it all about?

What that simply means is that when the students go to write examination, the examinations are written on computer. As soon as one finishes writing all he needs do is to press the button to summit, once the student summits, the score will just pop up on the screen Right on the spot, the student sees the score. So when we did that for all 100 level courses and all 200 level courses, we discovered that the issue of missing results was completely eliminated for 100 level and 200 level students. The issue of a lecturer expecting that a student will come and give some money before posting the print was also completely eliminated. That has brought a lot of sanity into the system. That does not mean that all lecturers were involved in this. You know it is only the bad things that people hear. We decided to choose 100 and 200 level students to start with because these are the most vulnerable. When they come to campus they do not know their right from their left so they can easily be cajoled and fall victim. As at today, I can tell you, we are the only university that has been able to do this with all 100 level courses and all 200 level courses.

What are the other benefits of this ICT system?

I must tell you in the past to collect school fees from 100 level, 200 level, we have what you call taskforce for school fees, moving from exam hall to do that, bring your receipt and all that and of course they can still beat them but this computer based examination has helped us to collect about 99 percent of our school fees because if you log in with your matriculation number if you have not paid school fees there will be no access so you cannot write the exam, they tried us and they found out that they could not manipulate it. So apart from the fact that it has brought sanity to exams it has helped us to also collect our school fees.

Students’ Union elections at AAU are always very violent. Which measures do you have on ground to tackle this menace?

I am sure you have heard that the last two Students’ Union elections were conducted electronically. There is electronic monitor everywhere as the votes are being cast. As they are voting, you can see clearly who is leading and who is not leading. It is not a question where you say go and count the result. This has been so helpful because in time past students get killed because people will go and snatch ballot boxes and run away. Students do not need to go and queue up anywhere now. All you need to have is your platform. All you need do is log in into the portal and cast your vote. Once you vote, it closes. You cannot open it a second time and you cannot vote twice. That is how we have been doing our elections. We developed the applications here.

Still on the ICT Revolution in the school… can you tell us more?

ICT has also positively affected the Senate meeting of the university. We have about two hundred members that are always there during examination presentation of results. Two hundred copies of results are produced and if it is a large class, imagine how many pages that will be produced and once there is an error they will say go and represent, meaning that all those papers are condemned. As a result of that, we decided that the senate will be presented through E-method. Computers are brought to the senate building, results are uploaded on the computers. If there is error we correct it right on the spot on the computer.

Most of the buildings used to be like poultry sheds. Can we truly say that the situation is now different?

When you come into the university, the first thing that strikes your mind is the infrastructure on ground. AAU has suffered that over the years. Although there are few buildings around which could be described as poultry houses but when we came onboard we decided that AAU must look like other universities. As God will have it, we were lucky that when I came onboard after several visits to TetFund, Nigeria Universities Commission (NUC), Federal Ministry of Education, we were able to access some funds. These funds that were accessed have been lying fallow for three years reason being that the method of TetFund. If they have given money to you for a project and you have not finished that project, they would not give you money for another project. As result, we had an issue. Faculty of Social Sciences was abandoned by the contractor. The last Council that was involved decided that we should do something about it. We had to ook for how we could raise resources to complete it so that we can have access to more funds. We did that and when TetFund came they saw that the place was now in use and so they allowed us to have access to that money. We were able to access three years of normal intervention and built a brand new Faculty of Laboratory Sciences.

Which other buildings were you able to complete with the funds?

After this we had access to another funds with which we completed another Faculty, the Faculty of Physical Sciences. It is about 99 percent completed. All we just need now is furniture in the laboratory to complete the job. As we were completing that, we were able through some contacts to have access to what they call Special High Impact Intervention Commitment for Techfund. Last year, only six universities were selected to benefit from this. We were selected to enjoy three billion naira Special High Impact Intervention to build two faculties. Due to the fact that the letter of award says at least two faculties, I decided to take advantage of the word, at least. This means something else can come from this money even though my colleagues in the other universities decided to restrict themselves to the two faculties, I decided to add a new Department of Mass Communication.

How many projects have you completed so far since you assumed office?

You must have been hearing that we have more than 33 projects completed. We have what we call Presidential Needs Assessments. The Federal Government after going round to assess the needs of Nigerian universities agreed that they need to implement some projects in universities from Federal Ministry of Education. We had access to that money, I think it was N740 million, the first tranche that came and with that because they gave us areas where we could apply the money. We rehabilitated some hostels, we built some workshops, a dance studio and staff offices. We have twin lecture theatres, 1,000 capacity lecture theatres. They are all over the place. There is one thing we use to identify them. It is the blue roof. Every blue roof on this campus is from our administration so that they are distinctive. The ones I helped to complete do not have blue roofs but the ones I started from scratch to the completion is blue roof.

How about the new administrative building? The present one is obviously not befitting of a tertiary institution?

The administrative block with a red roof is a project started by Edo State Government about 10 years ago. The project was left hanging until this present governor came. I brought it to his notice and he has promised that the project will be completed this month. They are presently working on it and I am looking forward to moving in because it is a more befitting building.

TerryTheVoice set to light up music scene with EP ‘Under Surveillance’

Okada ban: It is absurd for anybody to say, ‘for our votes, come and mess up Lagos’;…

Why some people see alternative medicine as magic —Omisande