by Tribune Online
in Politics
Reading Time: 6 mins read
A A 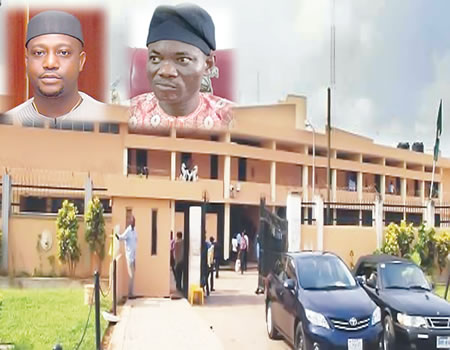 HENDRIX OLIOMOGBE, in Benin, reports on the feud between the Speaker of the Edo State House of Assembly, Honourable Kabiru Adjoto and his deputy, Honourable Victor Sabor Tiger Edoror, leading to a tense atmosphere in the chambers.

The details were sketchy and appear not to add up. It is all about the battle between the Speaker of Edo State House of Assembly, Kabiru Adjoto, who has cupped the image of a lion in the house based on his past activities and his deputy, Victor Sabor Edoror, whose middle name is Tiger.

Among other allegations, Edoror was charged with breaching legislative powers and divulging official secrets to the public. The Speaker wasted no time as he quickly set up a five-man adhoc committee to investigate his deputy. The charges were weighty; he alleged and added that they were capable of bringing the House to disrepute.

Rattled by that development, Edoror threatened to head to court to challenge Adjoto for breach of his fundamental human rights. He said the attempt was a pure case of witch-hunting.

Adjoto had earned the reputation of a lion in the House following his role in the impeachment of ex-Speaker, Zakawanu Garuba.  Like a lion, he was seen as very fearless as he firmly stood his ground during the saga.  Not even the violence on the floor of the chambers scared him until the mission was fully accomplished and Garuba was removed to pave way for Bright Omokhodion.

However, Tiger, the Deputy Speaker angrily pounced and took the fight right to the lion’s den. He demanded that the Speaker immediately disband the five-man committee which was set up to devour him or else he would run the full distance to the Supreme Court. He described the five-man committee as unconstitutional and in contravention of all extant laws.

Edoror who spoke through his counsel, Mr. Dele Igbinedion, told the Speaker that he lacked the constitutional right and powers to empanel a committee to investigate another lawmaker.

He predicted the outcome of the committee which he insisted would be guided to submit its report to enable the Speaker suspend the Deputy Speaker from plenary indefinitely.

In another letter to the chairman of the committee, Okunbor, Edoror stated that he ought to know details of the allegations levelled against him to enable him prepare his defence.

The stage which was once again set for a show down among the legislators was however doused by Deputy Governor, Phillip Shaibu according to an Assembly source who would not want his name in print.

The source disclosed that Shaibu, who had a stint in the House between 2007 and 2015, maintains a chummy relationship with the two people involved. He was said to have taken advantage of his closeness to the duo to broker peace. Both men agreed to sheathe their swords. It was no surprise that the matter died a natural death when the House reconvened on the appointed day of June 27.

Right from the start that the case against the Deputy Speaker, it appeared the matter was headed for a cul de sac as the accuser failed to provide any evidence linking the accused to the alleged crime.

Even now, Assembly watchers are trying to figure out what lies at the heart of the matter. Many have asked why the unending tussle between the two men who are supposed to be labouring together in search of delivery of dividends of democracy to Edo people considering the fact that the two men are of the ruling APC.

Investigations revealed that the genesis of the mistrust could be traced to Monday, August 14, 2017, when the leadership of the House was removed.

During the change of leadership, Speaker Justin Okonoboh was toppled and Adjoto replaced him. Edoror, an ex-Speaker then became his deputy. Since then, things have never been the same as mutual suspicion between the duo is fast becoming the order by the minute.

Again, the breakdown in the relationship between the duo was attributed to the fact that Edo State stands on a tripod of Edo South comprising the Bini People, Esan, in the Central Senatorial District and the Afemai people in Edo North. With Bini people of Edo South already occupying the seat of governor in person of Mr. Godwin Obaseki, precedence and equity demand that another zone produces the deputy governor. Phillip Shaibu from Edo North thus fits in as the state’s number two man. The position of Speaker and the state chairman of the ruling APC were supposed to go to the Esan people in Edo Central.  While Mr. Anslem Ojezua occupies the position of party chairman, the position of Speaker was however taken to Edo North where the Deputy Governor hails from.

Thus, the emergence of Adjoto from Edo North was seen by the Esan people as a breach of the gentleman agreement that had permeated governance in Edo State over the years.

It is largely seen by the people from Central Senatorial District that the present arrangement has obviously upset the political balance, leaving Edo Central without a representative in the three most important political positions in the state. This has no doubt resulted in several criticisms from a wide spectrum of well-meaning Edo people. Some traditional rulers from the three senatorial districts unequivocally frowned at the disruption of the political structure on the political tripod on which the state was hinged.

Since his assumption of office as the state Assembly Speaker, Adjoto has for sure been under intense pressure to relinquish the position in favour of any of the qualified members from Edo Central in order to maintain what they have severally called equity and fair play.

Most times, squabbles among parliamentarians are always linked to money sharing but Edoror dismissed that notion in this case declaring that it was because of mistrust. According to him, “The Speaker is always afraid that I am planning his impeachment to pave way for me. He feels that since I am an Esan man from Edo Central Senatorial District where the Speaker ought to come from, I am always plotting for his removal so that I could be made Speaker. He is unnecessarily apprehensive. Since the deputy governor is from Edo North where he comes from, he thinks I want to replace him. I didn’t divulge any official secret. It is a trumped up charge. He is only giving me a bad name because he wants to hang me. I am not after his job. It is not about money or any largesse.

“We belong to the same party. I want a good working relationship with him. He is just after me for nothing. He can’t do me anything. He should search his conscience. It is up to the party handlers to correct the imbalance and not me. The issue is not about me.”

Persistent attempts to get Adjoto’s office to respond to claims by the Deputy Speaker were rebuffed. But a source close to his office who spoke on condition of anonymity said that the matter has since been settled by Shaibu. The duo, he said have resolved to put the misunderstanding behind them for the common good of APC and Edo State.

“There was actually a plot by the deputy to unseat the Speaker when he was away to Saudi Arabia for the lesser Hajj pilgrimage. The deputy governor has, however, settled the matter. The Speaker is not willing to comment on the matter which he sees as unnecessary distraction. They have resolved to work together. The deputy speaker has instructed his lawyer not to take the case to court. The case is not in court and has been amicably resolved,” the source.