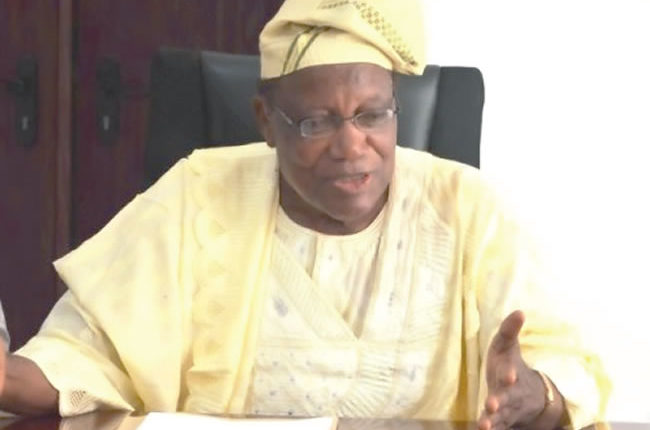 SOJI-EZE FAGBEMI looks at the theme of the National Executive Council (NEC) meeting of the Nigeria Union of Pensioners (NUP) ‘The welfare of pensioners in post COVID-19 era,’ in relations to the plight of pensioners at both federal and state levels. He also reports their resolve to consciously await President Muhamadu Buhari’s approval on a new minimum pension, in line with the new national minimum wage increase since April 2019.

Nigerian pensioners are now consciously and eagerly awaiting President Mohammadu Buhari, to, in a matter of days, approve the new national minimum pension in line with the constitution and laws on national minimum wage and pension.

Efforts have been made severally by the Nigeria Union of Pensioners (NUP) to get the new minimum pension approved and get its implementation on the way, since April 2019.

According to the NUP President, Dr Abel Afolayan, the activities of the leadership of the union in the last one year, has been geared towards achieving these dreams, even as he highlighted the plights of the elderly citizens as a result of poor treatment by the governments at all levels.

Dr Afolayan, while speaking on the issue of minimum pension and the pensioners plights during the NUP National Executive Council (NEC) meeting in Abuja, stated that the report on the minimum wage was completed and already submitted to President Buhari for his final approval, through the Secretary to the Government of the Federation (SGF), Mr Boss Mustapha.

Invariably, the NUP President said, as a son looks to his father, the eyes and hope of Nigerian pensioners are unto President Buhari, to, in days, approve the minimum pension, and ensure its immediate implementation at both federal and state levels.

Also, he believes, as assured by President Buhari, that the implementation of the minimum pension would be effective from April 2019, just as the new minimum wage.

He said: “You will recall that I reported our efforts and visited the Salaries, Income and Wages Commission on the minimum wage and salary increment enjoyed by workers last year. I am glad to inform you that the commission set up a tripartite committee with NUP and PTAD as members.

“The committee met severally, and I am glad to report to you today that the committee report has been accepted by the Salaries, Income and Wages Commission and the Commission has already forwarded the report through the Secretary to the Government of the Federation (SGF) to Mr President for his approval.”

Afolayan added: “This procedure may seem cumbersome to most of our members who wanted it done immediately. However, I must emphasize that this is the procedure in salary/pension review. Similarly, we have been assured that immediately Mr President gives his approval, the implementation of the increment shall be effective from April 2019, same as for the workers. Mr President himself has given us that assurance.”

He pointed out that the elderly citizens were able to weather the storm of the dreaded COVID-19 pandemic, despite their neglect by the governments, adding, however, that NUP did not lose any members to the virus, but regrettably, to the “actions and inactions,” of the government.

The NUP president said: “I am happy to report to you that in the face of all these problems, Nigeria Union of Pensioners (NUP) did not lose any member to the much-dreaded COVID-19.

“May I clearly state this today, that it is not Coronavirus or any other virus that is killing pensioners, elderly people and senior citizens generally, it is the government actions and inactions that are sending them to their early graves.”

So, in a communique issued at the end of the NEC meeting, the pensioners frowned at the nonchalance of the Federal Government at releasing the circular on pension increase in tandem with the recent wage increase of workers that was carried out in April, 2019.  To this end, the Union urged the Federal Government to issue the circular on the pension increase with immediate effect.

The communique said: “The meeting has decided to set in motion the machinery to sponsor a bill in the National Assembly in respect of National Minimum Pension.  Its legal team has been mandated to take up the matter with immediate effect. The meeting urged the Federal Government to come out with strong policies on health for senior citizens in the country.  This would go a long way in enhancing the longevity of these eminent citizens of the country and the attendant gains from the drinking of the fountain of knowledge from this group of people.”

The meeting also emphasized that the poor pension of pensioners had made their participation in the National Health Insurance Scheme a near impossibility.

At the state level, the union said the majority of the pensioners at the state levels, in all the states of the federation, are living in penury, as many of them still earn less than N10,000 per month. Specifically, the Union cited Imo and River states as required very urgent attention on the issue of pension and gratuity payment.

The communique, jointly signed by Afolayan and the NUP General Secretary, Elder Actor Zal, read: “The NEC-in-Session is dismayed about the recalcitrance of Imo State Governor, Hope Uzodinma, over non-payment of monthly pensions, gratuities and other entitlements to the state’s pensioners.  Similarly, Governor Nyesom Wike of River State had continued to show disdain for pensioners and continually shun the payment of gratuities, pensions and other arrears to our members in River State.”

The Union, however, commended President Buhari over his disposition to pensioners, particularly, the prompt payment of pensions of federal pensioners, state pensioners with federal share and pensioners from parastatals, and payment of arrears of pensions of pensioners in parastatals. The meeting also commended the Executive Secretary of Pension Transitional Arrangement Directorate (PTAD), Dr Mrs Chioma Ejikeme for her matured handling of pension matters; and praised the cordial relationship between PENCOM and the Union, and hope that the PENCOM Board in which NUP is a member would soon be inaugurated.

The NEC-in-Session eulogized the sagacity of the National President of the union, Dr Afolayan over his leadership of the Union and the great strides and achievements made under him and members of the Central Working Committee (CWC).

The clampdown on #EndSARS protesters

Stakeholders identify improved salaries for judges, others as panacea to official…