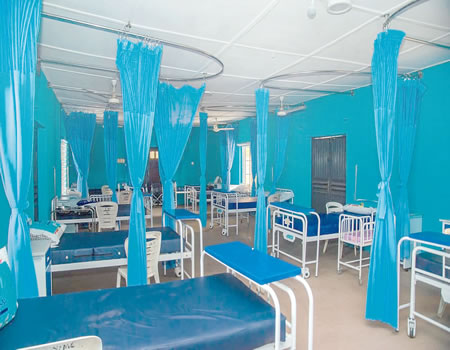 Prior to the intervention by the Oyo State Health Insurance Scheme, the healthcare centre ultrasound machine, five no pharmacy, ill-equipped laboratory, had operated with a dysfunctional inadequate personnel among other deprivations.

A health officer at the health centre, Dr Babatunde Arowolo described the centre as just a building, moribund and empty.

“This place was almost moribund. We just had a building but it was empty except for a few staff. We have two matrons, some adhoc staff and volunteers, including myself.

“We only had few beds. The only thing we had was an ultrasound machine, which was faulty. We only wrote drugs for patients. Our laboratory could only do basic tests like PCV, MP using RBT kits. We only dealt with basic things,” Arowolo said.

The tales of dilapidation in primary healthcare centres (PHCs) are similar across the country. Many PHCs lack capacity and have issues of poor staffing, inadequate equipment, poor distribution of health workers, poor quality of healthcare services, poor condition of infrastructure, lack of essential drugs, lack of power and water supply.

The National Primary Health Care Development Agency was subsequently set up to oversee primary health care and develop PHCs in the country. However, efforts to revitalize the PHC system, including National Health Insurance Scheme (NHIS), Midwives Service Scheme (MSS), Subsidy Re-Investment and Empowerment Programme, Maternal and Child Health (SURE-P MCH), Saving One Million Lives (SOML), PHC Under One Roof (PHCUOR) and Basket Funding are yet to achieve the desired impact.

Reports state that about 80 per cent of the over 30,000 PHC facilities in the country are non-functional. Most of the 721 primary healthcare centres in Oyo State are dilapidated.

Executive Secretary, Oyo State Primary Healthcare Development Agency, Dr Muideen Olatunji, cited abandonment and non-investment by government, over the years, as being responsible for the deplorable state of PHCs in the state.

He said the situation is made worse by lack of political will. “These PHCs in Oyo State have been abandoned over the years; nothing invested. The situation is so deplorable; almost all the facilities are dilapidated. The government’s investment has been so abysmal. Even the federal government has invested less than five per cent on health when World Health Organisation (WHO) recommends a minimum of 15 per cent. It’s garbage in, garbage out.

“Government has not been investing on health. Apart from the dilapidation in facilities, there is challenge of inadequate personnel. It will be capital- intensive but you need the right political will,” Olatunji said.

However, Makinde’s inauguration of the renovated ALGON Comprehensive Health Centre, Eyin Grammar, Ibadan shows his desire to close the yawning gaps in the health sector. At his inauguration on May 29, 2019, Makinde had ruled out the building of new healthcare centres, noting that he would rather focus on upgrading and renovating existing health care facilities and making the state health insurance scheme more accessible.

Allocating 5.18 per cent of the 2020 budget to the health sector further shows the intention. Speaking at the Eyin Grammar inaguration, Makinde said his intention was to renovate a minimum of one PHC in each of the 351 political wards in the state.

Before last week’s event, a PHC in Oranyan had been inaugurated with another in Oyo town declared ready for commissioning. “Here in Oyo State, we have 721 Primary Healthcare Centres across the 351 political wards. Although this number is not enough, our goal is to make what we have functional and affordable.

“So, in revitalizing the PHC service system, we are starting with the strengthening of a minimum of one PHC per ward. Therefore, we are focusing on renovating and equipping 351 PHCs in the state, for a start. We started with the PHC in Oranyan and used that as a standard for the subsequent renovations,” Makinde said.

Around the world, PHC is funded through extra-budgetary means, complemented by donor funding, which usually focuses on specific diseases and conditions. And, investment in PHC has proven to improve life expectancy and reduce mortality. In actualizing his PHC agenda to reach 351 wards, Makinde has spoken about a new funding structure for PHCs put in place.

“We also paid N19 million counterpart fund for the Integrated Medical Outreach Programme by the National Primary Health Care Development Agency (NPHCDA). As I said in my one year in office broadcast, we will start seeing the results of our new funding structure in the months to come,” Makinde said.

While residents in various parts of the state await the realization of Makinde’s intention to fix the PHC close to them, inhabitants of Olorunsogo, Eyin Grammar, Felele, Oranyan can revel in having a now equipped healthcare centre at their doorstep.

With her two-year-old girl strapped to her back, Mrs Basirat Kasali, a resident of Eyin Grammar, expressed gladness at the affordability of and accessibility to healthcare that the renovated PHC offers her family and her immediate community.

However, Dr Arowolo points out that the renovated health centre still has a challenge of inadequate trained medical personnel.

“This place is very good now, almost the taste of a general hospital aside from the issue of inadequate staff. Before, we only wrote drugs for patients which they may not get easily; we now have a pharmacy.

“In our laboratory, we can now run quite a good number of tests like Hepatitis, HIV, urinalysis, blood group, genotype. We have about 19 beds now and can made admission of 15 persons. We still need  fetal resuscitative facility. We have cylinders but we need oxygen. Then, very importantly, we need more competent and well-trained staff,” Arowolo said.

The man in charge of primary health care in the state, Dr  Olatunji, says the Eyin Grammar health care centre is one out of a total of five PHCs that have received attention in the past one year. He listed them as two PHCs in Akinyele local government area, one each in Oranyan, Oyo town and at Eyin Grammar.

Though Olatunji noted the challenge of getting capital to fix the PHCs, he said the political will of the state governor is a strong driving force.

“These things cost a lot of money. It will be capital intensive but once you have the right political will. This government has shown appropriate political will and that is what we leveraging on. The governor has stated his intention to touch on one PHC per ward, so we see how far we can go in this administration. The government is trying to take the bull by the horn but it is all-involving. Anybody that wants to come in to help is welcome. Corporate organisations, private individuals that want to partner are welcome,” Olatunji stated.

Like Olatunji, Executive Secretary, OYSHIA, Dr Olusola Akande emphasized that the resolve to revamp PHCs is inspired by the political will of Governor Seyi Makinde. This political, he said, has seen the state insurance agency itself renovate three PHCs in one year. Olatunji added that international donors, private individuals, corporate organisations have shown interest in revamping more PHCs in the state.

“For several years, no attention was given to PHCs. However, at the inception of OYSHIA, we decided to renovate at least the PHCs we accredited to use under the insurance scheme using innovative means. Also, the governor has come up with a robust mechanism to renovate at least one PHC per ward. He said in the days to come, we will see a general overhaul in the days to come because he has come up with a funding mechanism for the renovation of PHCs.

“So, everybody is leveraging on the goodwill and sincere disposition of the present government. In the last one year, a lot of proposals from local and international organisations have come showing interest in doing something in health. When you have a policy direction, you are bound to have people that want to come in and join hands with you. So, whether agency, donor or group, everybody has to be involved,” Akande stressed.