Arts and Culture
By Akintayo Abodunrin On Jul 18, 2021 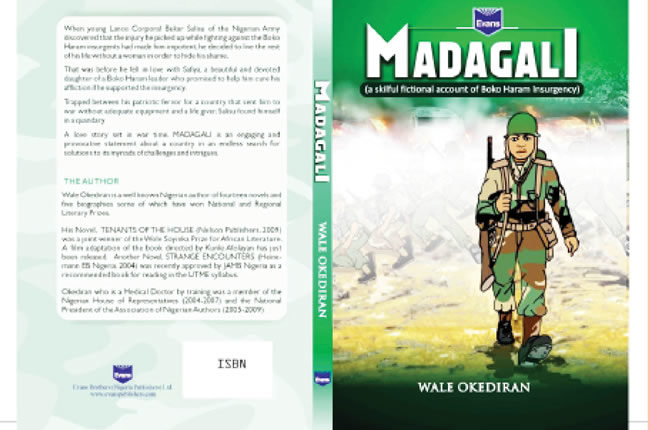 ‘Madagali’, the latest novel by Secretary-General of the Pan African Writers Association (PAWA), Dr Wale Okediran, will be presented on Thursday, July 29 by 10 am at the 2021 Nigeria International Book Fair.

The presentation, part of the Fair’s activities, will happen at Harbour Point Event Centre and would be chaired by the Minister of State for Health, Dr’ NimbeMamora. Other eminent Nigerians will join him.

Professor of International Relations and immediate past Vice-Chancellor of the Federal University, Oye-Ekiti, Kayode Soremekun, will review the book.

Published by Evans Publishers Plc, ‘Madagali’ is set in the northeast.  It centres on Salisu, a vibrant and committed Nigerian soldier shot by Boko Haram insurgents.  Initially thought to be inconsequential, the injury was later discovered to have damaged a major nerve and made the young man impotent.

To compound his woes, he is lured by his Company Commander, Lt Col Bala Humus, to serve as a courier in Humus’s nefarious business of supplying ammunition to the Boko Haram insurgents.

He is caught and goes through a gruelling court-martial that finds him guilty of ‘supplying dangerous weapons to the enemy’. Fortunately, he escapes the firing squad through the support of his close friends, his mother and three loving sisters. But that isn’t the end of his troubles, as he is involved in a love triangle with tragic consequences.

‘I tell stories because it gives me purpose’