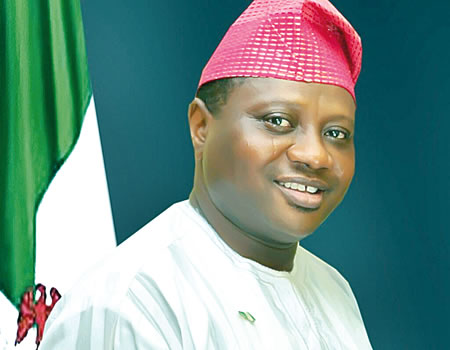 AS the preparation for the 2019 general election gathers momentum, stakeholders of the All Progressives Congress (APC) in Atisbo/Saki-East/Saki-West Federal Constituency of Oyo State, have thrown their weights behind the member representing the constituency in the House of Representatives, Hon. Olajide Olatubosun, to run for second term on the platform of the party.

The stakeholders of the party, who took the decision following separate meetings held recently in each of the three Local Government Areas of the constituency, declared to the lawmaker when he paid a courtesy visit to them, noting that the decision was hinged on the quality representation and people-oriented programmes of the lawmaker.

In Saki-West Local Government, the local government executive committee and chairmen of wards led by the APC chairman, Alh. Azeez Ayinla and other stakeholders, including the chairman of Asabari LCDA, Alh. Kareem Adegoke, unanimously endorsed Olatubosun, noting that he had been meeting the yearnings and aspirations of the constituents.

Speaking with Sunday Tribune, Adegoke said: “We have so much confidence in Hon. Olajide Olatunbosun and we are in support of his aspiration for a second term, such that we have clearly told other aspirants that they should contest for something else, as there is no vacancy for the House of Representatives in the constituency. Hon. Olajide has demonstrated that as a representative, it is possible to be accessible and to be close to the constituents. He has been meeting the yearnings and aspirations of the constituents.”

Also during a similar courtesy visits to party elders in Saki-West such as Alh. Yekini Arikose, Alh. Raimi Ojongbodu and Chief Mathew Adeyemo, Hon. Olatubosun was commended for giving good representation and for bringing the dividends of democracy to the constituents.

For the constituents, there was a unity of view on the quality representation being offered by the lawmaker, with some of them praising Olatubosun for being an unequalled and selfless representative of the people.

From Saki to Ago-Are, from Tede to Ogbooro, several leaders of the APC had pointed out that no office holder from the constituency had ever taken the fulfilment of electoral promises and improvement of the electorate’s welfare as a sacred priority like Olatubosun. They added said that aside his performing his legislative functions wholeheartedly, the federal legislator had assisted his constituency in the area of provision of potable water, construction of school buildings, rehabilitation of  roads, awarding of scholarships, securing of jobs for some unemployed graduates and other unemployed persons as well as empowerment programme for farmers and other constituents.

The APC elders as well as its members had, therefore, called on Hon. Olatubosun to run for a second term as federal lawmaker, even as they vowed to work for his victory in the forthcoming general elections.

In his response during the visits, Hon. Olatubosun was clear and articulate on his achievements and vision for the constituents. According to the lawmaker, his gesture was in fulfilment of his campaign promises to alleviate poverty among his people through skill acquisition, job creation and regular donation of cash and materials. Explaining that he considered his election into the National Assembly as a call to service, the lawmaker promised to continue to work for the well- being and welfare of the constituents.

He maintained that although he won the election on APC’s platform, he was meant to serve everybody in his constituency, thereby calling for the co-operation and unflinching support of the constituents in his bid to chart a new course for the area and give a new lease of life through the alleviation of people’s suffering and the improvement of their standard of living.

I will give Buhari a pass mark, but… —Major-General Haruna, ex-ACF chair

History will not be kind to APC government ― PDP