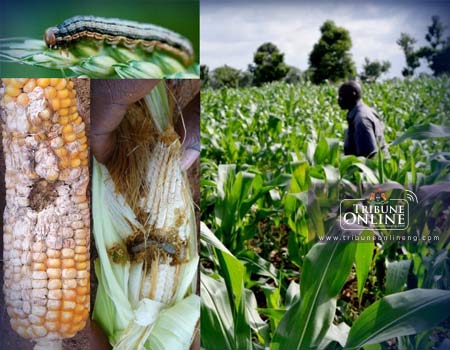 Following the threat posed by the armyworm invasion in farms across the country, the Jigawa State Government have trained 630 youths on pest control in order to contain the spread of the pest.

The Deputy Governor Barr. Ibrahim Hassan recently embarked on an assessment tour of farmlands affected by army worm invasion (Spodoptera exempta) which was noticed one week ago and is threatening to wipe out early planted rice, sorghum, guinea corn and maize across the state.

Earlier, the Ag Governor ordered the mobilization and deployment of about 630 youths who were trained as pest control agents under the value chain program to spray the affected areas and create buffer zones to check further infestation.

A pesticide company, JASCO has also been asked to release about 1,000 cartons of contact pesticide at no cost to farmers for use by the pest control team.

The Jigawa state government also assured the farmers that partially affected crops will recover and thrive after one or two rains.

Affected farmers expressed gratitude to the government for the swift response and said a major catastrophe had been averted by the timely intervention.