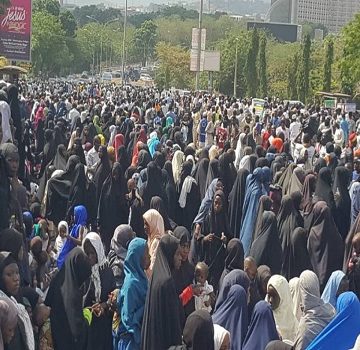 THE Islamic Movement of Nigeria (IMN) otherwise called Shi’ites has said that aftermath of their clash with the Nigerian Army, over 1000 of its members were still missing, while 156 is being detained by the Nigerian Police.

The Shi’ites who are the followers of Sheihk Ibraheem El Zakzaky, also said that so far, they had spent about N8 million treating the casualties of the clash, and additional N25 million needed to complete the treatment.

Addressing journalists in Abuja on behalf of the Movement, Sheihk Abdullahi Zango said they would continue the protest until they secure an unconditional release if their leader, Sheihk Ibraheem El Zakzaky.

“I want to inform you that on Saturday, 3 November 2018 Imrana Abdullahi, who is receiving treatment at University of Abuja Teaching Hospital, Gwagwalada due to injuries he sustained from the attack of the Military and the Police has passed away. This brings the number of people killed by the Military and Police to 47.

“Moreover, presently 106 followers of Sheikh Zakzaky are receiving treatment of injuries at various hospitals in Abuja. Presently, more than Eight Million Naira has been spent in treating causalities and there is a need for an additional Twenty Five Million Naira to attend to other causalities.

“Likewise, more than 1,000 people got missing, 156 were detained by the Police in various prison.

“We thank the public for their objective responses concerning illegal detention of Sheikh Ibraheem Zakzaky and we also need the support of everybody in ensuring the release of the Sheikh and his wife.”

He, therefore said, “While mourning the passing away of our brothers and sisters, we will continue to protest and our demand is simple and clear that is unconditional release of our leader Sheikh Ibraheem Zakzaky.”