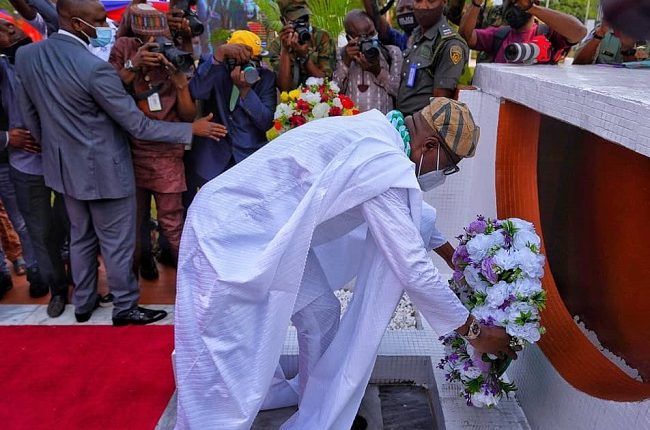 Lagos State governor, Mr Babajide Sanwo-Olu, on Friday hailed all officers in the military, Nigeria Police and the legion for their efforts in protecting the country against external aggression and keeping the peace internally.

The gave this commendation while speaking at the year 2021 Armed Forces Remembrance Day parade and wreath-laying ceremony at the Remembrance Arcade, Tafawa Balewa Square (TBS), saying Nigerians should be thankful to God for this year’s ceremony holding despite the COVID-19 pandemic.

Sanwo-Olu, while applauding the organisers of the programme, said despite the current situation of the COVID-19 pandemic in the country and other parts of the world, they could keep up with the yearly ritual while adhering to safety protocols.

“It is usually a yearly ceremony and we are thankful that this year’s ceremony could still be observed.

“I want to congratulate and commend all of our officers in the military and also the Nigerian Police, but more especially men of the Legion and everybody that has participated in this year’s Armed Forces Remembrance ceremony, the parade, men on guard and everything.

“I think it has been a testimonial and it is a yearly ritual that we are thankful to God that we can still keep this year’s activity as important as it is. We were still able to observe all of the protocols and you could see that everything has gone very well. It is just a one- hour event and we are thankful for the organisers that they have been able to put this together again,” he said.

Governor Sanwo-Olu during the Armed Forces Remembrance Day laid the wreath at the arcade and also released white pigeons and balloons into the air.

The State Deputy Governor, Dr Obafemi Hamzat; Secretary to the Lagos State Government (SSG), Mrs Folasade Jaji; Service Commanders; State Chairman of Nigeria Legion and other dignitaries also laid the wreath during the ceremony in memory of the falling heroes.

The surprise visit made on Friday night by the leaders of the ruling All Progressives Congress (APC) to former President Goodluck Jonathan at his residence in Abuja triggered a stir in the major political camps, resulting in at least four possible theories.. Armed Forces Remembrance Day