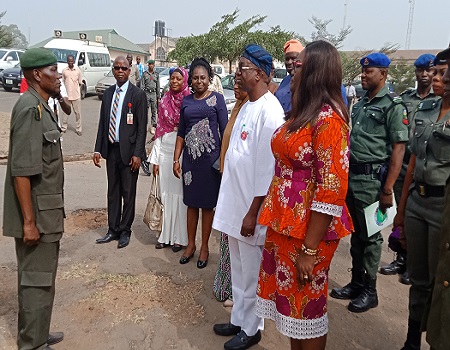 Makinde disclosed this on Monday during the Launching of the 2020 Armed Forces Remembrance Day celebration fundraising appeal week at the House of Chiefs, Parliament Building, Secretariat, Ibadan.

The governor, who was represented by his Deputy, Engineer Rauf Olaniyan said Armed Forces Remembrance Day celebration was borne out of the need to honour the fallen heroes who laid down their precious lives in service to humanity during the first and second World Wars, Civil War, peace support and International Security Operatives.

He said: “It is noteworthy that collective efforts should be made to consciously care for the needs of maimed soldiers, the widows, their children and other dependants of the fallen heroes.

“I am reliably informed that the Nigerian Legion, Oyo State chapter has initiated various relief packages designed to make Legionnaires, Widows and their dependants self-sustaining thereby reducing poverty. Their efforts are commendable and I wish to assure you that the Oyo State government will continue to support the activities of the Nigerian Legion, especially those viable projects meant for the benefit of the dependants of the fallen heroes.

“I appeal to the humanitarian spirit of our industrialists, commercial firms, corporate organisations, philanthropists and all individuals to donate generously to the Armed Forces Remembrance Emblem Appeal Week Fund, so as to support people with disabilities and the less-privileged ex-servicemen and women. There is nothing done that can be too much or small for the families of our fallen heroes and heroines,” he said.

Meanwhile, Chairman, Nigerian Legion, Oyo State Command, Deacon Michael Oladoye Fajimi said the main focus of the Armed Forces Remembrance Day Celebration was to raise fund in order to cater for the veterans who are still alive but incapacitated, living in despair, the children and widows of the departed heroes must be catered for.

He said widows, war veterans, disabled, old aged from all area councils of the state were empowered with the donations realised during the 2019 Armed Forces Remembrance Day celebration.

Present at the programme includes; Security Personnel, Religious Leaders, Political appointees among others.

Low turn out as schools resume for second term in Oyo