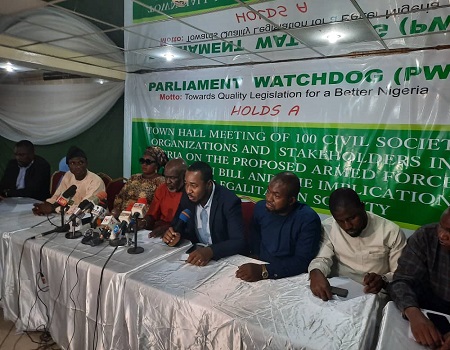 “That Armed Forces Service Commission Bill is a call for anarchy in Nigeria and to subject Nigeria to public ridicule among the comity of Nations.
“That Bill is an affront to the office of the President and Commander-in-Chief of the Armed Forces of the Federal Republic of Nigeria.
“That the Armed Forces Service Commission bill lacks merit in its conceptualization and its provisions are against the Constitution of the Federal Republic of Nigeria and an attempt to rewrite history through unconventional means.
“That the National Assembly through the proposed Armed Forces Service Commission Bill is attempting to reduce Nigeria to a Banana republic where they can subject their whims and caprices on Nigerians unpatriotically,” the communiqué said.
The coalition, therefore, called on the National Assembly to save its face from what it termed a despicable attempt at usurping the powers of the President and Commander-in-Chief of the Armed Forces with regards to the appointment of Service Chiefs in the country.
It further urged the National Assembly to desist from the attempt to destroy a strategic national and professional asset that had stood the test of time since the creation of Nigeria.
Besides, the coalition equally urged  the federal parliaments not to lose sight of its functions as clearly spelt out in the Constitution of the Federal Republic of Nigeria, and which must align with the strategic goals of ensuring growth and sustainable development
“That the National Assembly must realize that its role in the Nigerian setting is to enact laws that would serve the overall interest of the country and not bills that suit their purpose and fulfils their desires and interests.
“That the Armed Forces must not be dragged into politics as it is critically engaged in sensitive internal security assignments that requires all level of concentration in the light of the politically sponsored security challenges in the country,” the communiqué added.