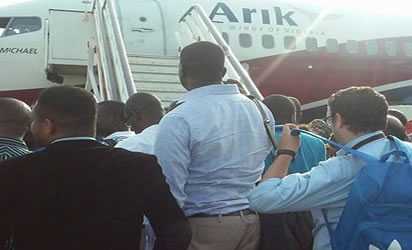 The Federal Government has dismissed the call to convert Arik Air into a national carrier rather than establishing a new one from scratch.

Briefing State House correspondents after a meeting of the Federal Executive Council (FEC) presided over by Vice President Yemi Osinbajo at the presidential villa, Abuja on Wednesday, Minister of Aviation, Hadi Sirika, said Arik Air now under the management of government is not suitable for a national carrier.

The Managing Director and Chief Executive Officer of the Asset Management Corporation of Nigeria (AMCON), Ahmed Kuru, had made the suggestion to change the status of the airline, which was taken over at the brink of bankruptcy by his agency.

He had argued that the airline has since been restructured and positioned on the path of growth and profitability, noting that a new airline will cost the federal government a fortune, especially in the face of the nation’s tight budget.

Sirika, however, dismissed the suggestion, saying that Arik Air business plan is not in conformity with the idea of a national carrier.

He said Arik Air can, however, purchase shares in the planned national carrier.

“The carrier that I intend to bring is such a carrier that will support the national economy, with $450 million GDP for 200million people, very equipped to compete favourably.

“The international airlines that have dominated Africa, 80 per cent of those airlines are non-African. In view of the AU Agenda 2063, the Single African Aviation Market, we thought that there will be an airline that will take up that challenge; that will take advantage of it and be able to provide services to our people.

“Nigeria, being the first country to kick-start the declaration in 1999, to establish a one common market in Africa; at the time, we wanted to take advantage of the Nigeria Airways which was the strongest airline on the continent, and we thought that we could take advantage of that and it would pay Nigeria very well. Tables turned, decisions were reversed and now, Nigeria was unlucky to have an airline that can participate in that manner.

“So, the answer to your question is that Arik, as presently constituted, is not in line with the thinking of the ministry. It will not be able to give us that airline that we need.

“However, Arik as an entity, since it is private-sector driven, can either buy shares in the new ventures or invest in any manner in the business as presently approved.

“We are not saying once we have a national carrier, every other airline goes down. No. It is our duty to continue to support businesses.”

The Aviation minister also said that FEC approved N574 million for insurance of College of Aviation in Zaria and another N271 million for perimeter fencing of Port Harcourt International Airport, which was abandoned since 2011.

In her remarks at the briefing, Minister of Finance, Budget and National Planning, Zainab Ahmed, revealed that FEC approved a total of N5.72 billion for construction and consultancy services for the National Deposit Insurance Corporation (NDIC) offices.

She explained: “The contract approval is in the sum of N3.239 billion including VAT. This project is to be completed in 96 weeks. The NDIC zonal office in Bauchi has been operating from rented office accommodation and the office accommodation has since become unconducive for a good working environment.

“The corporation would, therefore, be saving money but also in building the office accommodation when it is completed, it will provide a comfortable and clean environment for the staff, it will boost their morale as well as productivity.

“We have of course during these processes sought the due approvals from the BPP.

“The second memo that was presented to the council and was approved today is also in respect of NDIC. It is for the award of contract for 12 consultancy services for the development of NDIC corporate head office annexe in Abuja, Its office in Ikoyi Lagos as well as a training centre in Lekki in Lagos.

“In 2015, the Federal Executive Council had approved the construction of these three buildings. So, what we are asking for now is for stage three which is the construction phase of the work – the consultancy related to architecture, structural, mechanical and engineering.

“The total amount that is approved is the sum of N2.489 billion including VAT. This is for 12 consultancy firms for three different categories of professionals for the three office buildings

Unions close down operations over 90% staff layoff, other