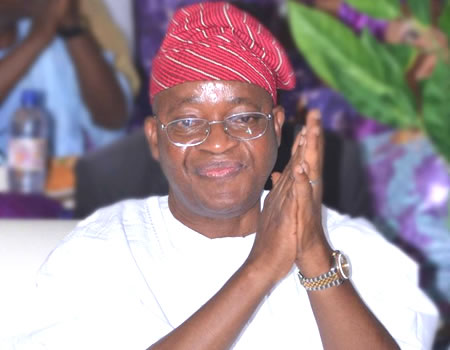 The Chief of Staff  to Governor Rauf Aregbesola of Osun State, Mr Gboyega Isiaka Oyetola, on Friday won the governorship primary of the All Progressive Congress (APC).

The results were announced by one of the members of the electoral committee of the governorship primary,  Senator Ovie Omo-Agege, representing  Delta Central Senatorial District in the National Assembly.

At press time on Friday, results from 28 out of the 30 local governments in the state had been declared with Oyetola winning in 27 overwhelmingly.

Omo-Agege  held the fort for the chairman of the electoral committee, Governor Abubakar Yari who left before the conclusion of the announcement.

Yari had at about 6.15 pm left the secretariat of the APC in Osun State, located on Gbongan-Ibadan expressway in company of the Oyo State governor, Senator Isiaka Ajimobi, his Osun State counterpart, Mr Rauf Aregbesola and former governor of Ekiti State, Mr Niyi Adebayo.

A total of 17 aspirants were to participate in the exercise that took place in the 332 wards across all the local government areas of the state, but three aspirants withdrew from the race early on Friday.

However, Senator Babajide Omoworare, the Secretary to the Osun State Government, Alhaji Moshood Adeoti, as well as the Chairman of  the Local Government Service Commission, Peter Babalola, pulled out of the exercise.

The primary began in the morning with the distribution of sensitive materials to officials amid tight security at the APC secretariat in Osogbo, the state capital.

But some hoodlums allegedly attacked a party official with an axe around Ward 1, opposite Laro Timehin Middle School, Osogbo, during an attempt to snatch the result sheet.

One of the party members who witnessed the incident told Saturday Tribune that trouble started around 2.15 p.m. when one of the officials was counting voters on the queue.

He explained that as the counting of the people who lined up for Oyetola and Lasun Yussuf continued, one of the thugs who had lurked around hit the official holding the result sheet in the head with an axe.

According to him, the development caused people to flee and it took the arrival of security agents at the scene for normalcy to be restored.

The victim of the attack was said to have been taken on a motorcycle to an undisclosed location.

When contacted, the Director of Publicity, Research and Strategy of the party in the state, Mr Kunle Oyatomi, said he could not make a comment because he had yet to receive details of the incident.

Meanwhile, there were alleged cases of vote buying as one of the voters, who was not a member of the APC, confided in our correspondent that she received the membership card on Thursday night to vote, with a promise of N10,000.

She said, however, that the disruption of the exercise in Ward 1 had dashed her hope of getting the money.

It was gathered that voting did not start until 12.00 p.m. in most of the wards in Modakeke, one of the communities in Osun East Senatorial District.

Alhaji Adeoti  announced his withdrawal from the race with a vow that he would still become the state governor, hinting at leaving the party.

In a letter addressed to the chairman of the Governorship Primaries Committee dated 19th July, which was obtained by Saturday Tribune in Osogbo, Adeoti stated that “the primary was arraigned, skewed and designed to favour Alhaji Isiaka Gboyega Oyetola, the cousin of the national leader of our party, Asiwaju Bola Ahmed Tinubu. There is no credible register of members with which a free, fair and transparent direct primary could be conducted. A cooked up register, composing handpicked persons loyal to the emergence of Oyetola was computed and printed in a firm owned by Oyetola in Lagos.”

Similarly, the chairman of Osun State Local Government Service Commission, Chief Peter Babalola, who is also one of the APC gubernatorial contenders has also withdrawn from the race.

Benue APC, Gov Ortom in war of words •You gave yourself red card —APC •APC is one man show —Ortom