Appointment of new Emir of Zazzau gave me the opportunity to re-address 100-year injustice, says Elrufai 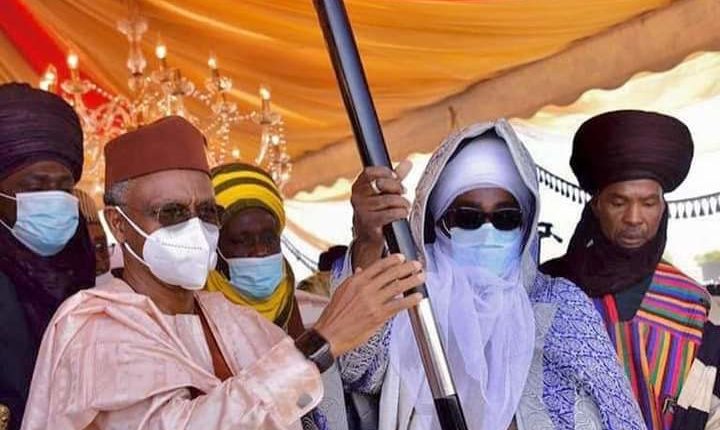 Governor Nasir El Rufai has explained that the appointment of Ambassador Ahmad Nuhu Bamalli as the 19th Fulani Emir of Zazzau has afforded the government an opportunity to redress a colonial injustice.

The governor who made this known during the presentation of staff of office to Ambassador Bamalli on Monday, recalled that the Emir’s grandfather, Aliyu Dan Sidi was unjustly deposed by the colonial Governor of Northern Region, Herbert Symonds Goldsmith.

According to El Rufai, the handing over the Staff of Office to Emir Bamalli ‘’is taking place exactly 100 years since the colonial Governor of Northern Region, Herbert Symonds Goldsmith, unjustly deposed your grandfather, Emir Aliyu Dan-Sidi of blessed memory.’’

The governor further said that the vacancy of the throne, following the death of Alhaji Shehu Idris, also gave the government the opportunity ‘’ to return to the enduring principles that guided the appointment of Emirs under the Sokoto Caliphate. ‘’

El Rufai argued that ‘’it is on the basis of due regards to these customs, rules and enabling laws that Almighty Allah chose Your Highness to be our Emir, and imposed on me the constitutional duty to appoint you. I therefore call on all those that contested the Emir-ship to accept the will of Allah and join hands with the 19th Emir of Zazzau for progress and harmony in the Emirate.’’

The governor also appealed ‘’ to the title holders, district heads, members of the Emirate Council, the good people of Zazzau Emirate, and indeed all the citizens of Kaduna State to rally around our new Emir by extending to him their full support and cooperation in the same way they extended support to his predecessors to enable speedy development of the Emirate and the State in general. ‘’

El Rufai warned that his ‘’ administration expects the loyalty of all persons to our Emirs and Chiefs and will take firm and decisive action against any person that attempts to undermine, in any shape or form, the non-partisan and noble status of our traditional institution, particularly Zazzau Emirate.’’

‘’The new traditional institution’s law will also legislate clear dynastic succession order in all emirates and chiefdoms with more than one ruling house, outline guiding principles for the recommendations of district heads, traditional council members, emirs and chiefs, for appointment, consider expanding the membership of councils, and clearer roles of the kingmakers,’’ he said.

While paying tribute, the immediate past Emir of Zazzau, El Rufai noted that Alhaji Shehu Idris had a most distinguished reign.

‘’ In his 45 years as Emir, he was regarded as a just and fair ruler, a peacemaker par excellence, an outstanding administrator and a kind hearted leader and father. He contributed immensely to the successes recorded by our administration, especially in the critical areas of education, preventive healthcare, peacebuilding and mass mobilisation.

‘’ His fatherly advice and guidance in our then weekly Security Council meetings would remain indelible in our minds. May Jannatul Firdaus be his final abode,’’ El Rufai recalled.

The governor expressed confidence that Emir Bamalli ‘’ will consolidate on the solid foundation already put in place by your predecessor,’’ adding that ‘’the admirable effort you are making to unify Zazzau Emirate should continue while remaining open and receptive to positive contributions from all the relevant stakeholders.’’