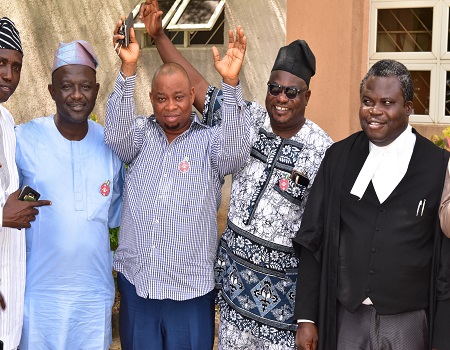 The Court of Appeal sitting in Ibadan on Monday declared the Peoples Democratic Party (PDP) House of Assembly candidate for Ibadan South East Constituency 1, Honourable Rasak Abudulahi as the winner of the State Assembly election.

According to Bada, he said the election of Abdulahi should be upheld.

“INEC did not make use of voters registration during the election but the court pronounced these allegations as blatant lies from the pit of hell,” APC alleged.

Speaking to the reporters after the victory, Abdulahi said he is happy for the outcome of the Appeal, saying the victory is of Allah while promising to deliver his promises to his people.

“The success of today’s judgment is a victory to Almighty Allah, the good people of Ibadan South-East, our counsel and party leaders.

“I have a lot of plan for my people which I promised during the electioneering the campaign, I will deliver them in due process and make Ibadan South-East a place to reckoned with.”

In his own reaction, the Majority Leader of the Oyo Assembly, Honourable Sanjo Adedoyin said they are not expecting anything than victory.

He said the last general election was a free and fair election, adding that oppositions are just trying to prove nothing.

“The oppositions know they would not get anything from the Appellate Court, even the election of Oyo State governor, Engineer Seyi Makinde was a free and fair election but Appeal case was controversial and I believe that it would be resolved in no time.