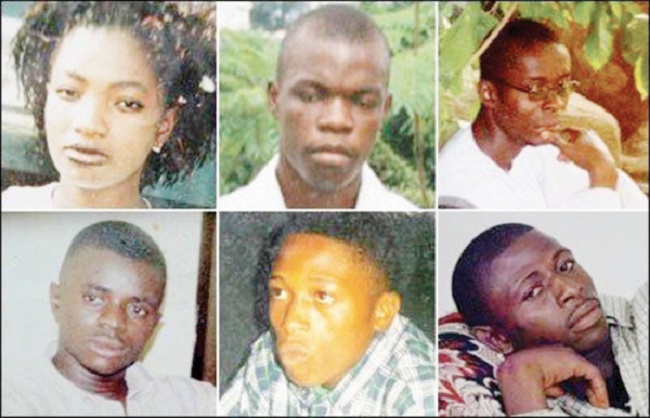 Sixteen years after their gruesome murder by some policemen, a senior lawyer, Amobi Nzelu, on Wednesday urged the independent investigative panel on violations of rights by defunct SARS and other police units to revisit the case of Apo six young traders extrajudicially killing by some police officers on June 8, 2005.

Nzelu made the appeal when the panel, set up by the National Human Rights Commission (NHRC), heard the petition filed before it by Elvis Ozor and Edwin Meniru on behalf of Ifeanyi Ozor and five others.

Nzelu, who represented the petitioners, told the panel that the panel of inquiry set up by ex-President Olusegun Obasanjo headed by Justice Olasumbo Goodluck to unravel the unfortunate incidence awarded N3 million compensation in favour of each of the victims.

According to him, the Federal Government paid the N3million compensation to each of the six families and exhumed the corpses for proper burial, saying, however, that the N500,000 awarded to each of the families as burial cost was never paid to them.

He, therefore, urged the panel to order for an upgrade of the N3million compensation paid to each bereaved family by the Federal Government to N200million each, submitting that what was paid was grossly inadequate to assuage the pains suffered by the families.

He noted that the victims of the extrajudicial killing were these young men and woman who were not above 25 years of age as of the time they were murdered by policemen.

“My appeal to this panel is for you to have a look at that compensation. We are seeking for N200 million to be paid to each of the families as compensation for the pains the death of their loved ones must have cost on them,” Nzelu, who said he had spent 41 years as a lawyer, told the panel.

Responding to this, the lead counsel for the police, DCP James Idachaba, said that the petition was not supposed to be brought before the panel, submitting that the Justice Suleiman Galadima-led panel was set up by the Federal Government to investigate live issues, not matters already decided by competent authorities.

He informed that the Apo six case was comprehensively dealt with by both the then Justice Goodluck-led judicial panel of inquiry and the High Court of the FCT presided over by the immediate past Chief Judge of FCT, Justice Ishaq Usman Bello (retd).

“For the complainants to come before this panel, it would amount to asking the current panel to review the decision of Goodluck’s panel and the judgment of the FCT High Court,” Idachaba said.

He then submitted that the only option left for the complainants and their counsel was to appeal the High Court of FCT judgment.

The counsel for the police further told the panel that the petitioners’ counsel had not shown any proof that the N500, 000 for the burial expenses of the deceased was not paid to each of the families as he claimed.

“The counsel has already told this panel that the money recommended by the panel was paid to the families. Now he is saying the money was not sufficient. I may not know whether this panel is an appeal for the previous panel.

“Does this panel have the jurisdiction to now review the report of the panel set up specifically for that issue which also made a recommendation?

“I will submit that this petition is nothing but an attempt to raise sentiments which lack merit,” Idachaba declared.

Following submissions, both parties, the chairman of the panel, Justice Suleiman Galadima (retd) adjourned till April 15th for a conference to look at the various documents alluded to by Nzelu, including the FCT High Court judgment, the White Paper on the Justice Goodluck panel, with a view to doing justice to the case.

Based on the indictment by the Goodluck panel, six police officers, Danjuma Ibrahim; Othman Abdulsalami; Nicholas Zakaria; Ezekiel Acheneje; Baba Emmanuel and Sadiq Salami were arraigned before the FCT High Court on a nine-count charge of conspiracy and culpable homicide, which contravened the provisions of Sections 97 and 221 (a) of the Penal Code Law.

The surprise visit made on Friday night by the leaders of the ruling All Progressives Congress (APC) to former President Goodluck Jonathan at his residence in Abuja triggered a stir in the major political camps, resulting in at least four possible theories…Apo 6 reechoes at NHRC  Apo 6 reechoes at NHRC