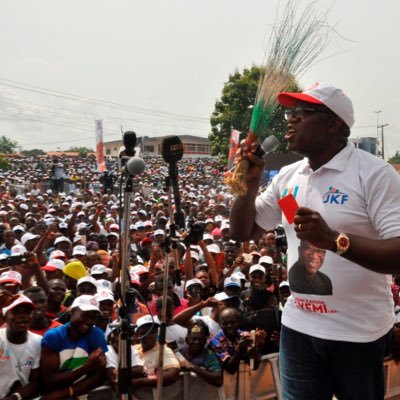 THE women wing of the All Progressives Congress (APC) on Wednesday stormed the streets of major communities in Ekiti State in a solidarity road show to mobilise support for the party’s candidate, Dr Kayode Fayemi, in the July 14 governorship election.

Led by Erelu Bisi Fayemi, the roadshow went through towns, such as Ayetoro, Ijero, Okemesi, Efon, Aramoko and Ilawe, among others, where Erelu Fayemi and the Women Leaders rode on the Float Truck all day, doing voter education and handing out gifts.

The road show that went with fanfare witnessed massive crowds identifying with the women in their efforts to ensure victory for APC so ensure the return of the era of salary payment and development projects in Ekiti communities.

At all campaign stops, food items, such as rice, semovita, wheat, milk, salt, among others, were given out to the hundreds of admirers who trooped out to see the exciting show.
The very colourful roadshow had a massive convoy of cars which stretched as far as the eye could see.

Observers marvelled at the display of commitment of Ekiti APC Women who also braved the rain at some point.

The road show will continue on Thursday, July 5th and end on July 6th.

El-Rufai competent than other governorship aspirants in Kaduna ―Aide