APC will never take power from me ― Gov Umahi 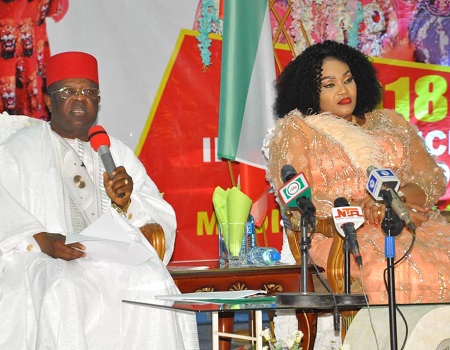 Governor Umahi made the vow at his bouquet hall on Friday night, during the quarterly media chat/dinner as part of celebrations to mark the nation’s 58th anniversary and 22nd year of the state’s creation.

According to the Governor, APC members in the state are not genuinely supporting the president, but only interested in his job which he said; they have no power to take it away from him nor obstruct the relationship he already has with Mr President, that is beyond politics.

“This is the tripod on which the state’s equity rests and even though a sitting governor wanted to truncate it, God brought a David in my person to ensure it was maintained and it will be maintained till the end,” he said.

However, Umahi who said his decision to modernise the state capital is irreversible took time to highlight his administration’s strides in all sectors including infrastructure, agriculture, education, health, human empowerment, among others and charged all well-meaning  Nigerians to always know that power comes from God. Also to check the brazen quest for political offices which has brought several problems to the country.

He further added that he is not ashamed to call Mr President his friend even though they both belong to different parties.

On the part of cementing relationships, Umahi said that the one and half kilometres glass tunnel that is under construction in the state by the State Government which will be one among the best in the world would be named Buhari when completed.

“I have said repeatedly that I don’t have to insult him to show that I am a PDP member and it is not my duty as a governor to insult the President.

“This does not mean that I do not identify with the ideals of the PDP, but it must be stated that those who say they are supporting Buhari in Ebonyi are only deceiving the people,”

“I want to state that outside my wife, Buhari remains my only boss and should be respected by Nigerians because of his status as the president.

Meanwhile, Governor Umahi who expressed worries as politicking, recklessly taken the centre stage in the nation’s affair by some persons who have nothing to offer, said if not checked for the next four years, the country would become too difficult to handle its consequences.

He then urged Nigerians to always pray for and respect president Buhari.

“The fact is that as a human being, he might not be doing everything correctly, but the citizens owe him prayers and understanding to lead the country aright.

“Buhari as the president is the symbol of the country just as the governors are mini-presidents in their respective states.